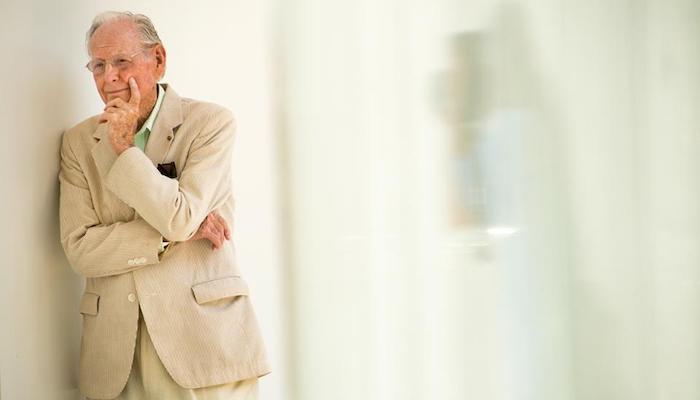 Wayne Theibaud poses for a photo at the Jan Shrem and Maria Manetti Shrem Museum of Art. (Gregory Urquiaga/UC Davis)

Ralph J. Hexter, Acting Chancellor at the University of California, Davis, announced the recipients of a new series of innovation awards at a ceremony on June 28 in Davis. The UC Davis Chancellor’s Innovation Awards recognize faculty, community partners, and industry leaders for their work, dedication and success in achieving societal impact either through innovations in technology or social engagement.

“These new awards reflect the growing importance of UC Davis as a vital incubator and promoter of innovation in the Sacramento region and beyond,” Hexter said.  “Each of our inaugural winners is a model innovator who successfully nurtured to reality a novel idea that can improve the quality of our lives.”

Dushyant Pathak, Associate Vice Chancellor of Research and Executive Director, Venture Catalyst adds, “UC Davis has a strong history of enabling societal benefit from our research, faculty service and community partnerships. The Chancellor’s Innovation Awards represent a visible new way in which we can recognize campus innovators and members of our community for their contributions to society.”

Innovator of the Year Award

The Innovator of the Year Award recognizes individual faculty or staff, or teams (which may also include students) whose inventive, innovative or entrepreneurial activities have had a measurable societal impact or have a very strong potential to do so. Each recipient receives a $10,000 award that can be applied to his or her research or social engagement program.

Two recipients received the award this year, Harry Cheng and Cristina Davis, both professors in the College of Engineering.

Harry Cheng is the developer and leader of the UC Davis Center for Integrated Computing and STEM Education (C-STEM). C-STEM uses innovative computing and robotics technologies to increase student interest and transform computing and STEM education in both formal and informal K-12 programs. More than 200 schools in California have officially adopted the C-STEM curriculum, which directly benefits more than 10,000 students. Cheng has worked at UC Davis for 24 years and has dedicated the past 10 years to transforming K-12 math education through computing and robotics. Using Cheng’s approach, students learn how to integrate computer programming as well as logical and critical thinking skills. The results have shown significant potential in closing the math achievement gap for student subgroups that have historically underperformed.

Cristina Davis has a long history of creating novel solutions to problems in the fields of medicine, defense, agriculture and veterinary medicine. She holds seven patents that have been licensed and developed into product lines. She is the co-founder of two UC Davis affiliated startups, SensIT Ventures, Inc., and XTB Laboratories, Inc. Her most recent innovation is a miniature handheld device that can measure chemical biomarkers in human breath, which can be used to both diagnose and monitor medical conditions. In addition to portability, Davis’s device also has the potential to integrate with cell phones or other personal mobile devices, creating the possibility for near real-time diagnostics and monitoring on-demand. This innovation has the potential to have a life-altering impact in pediatric populations. 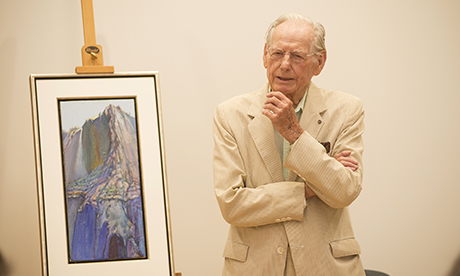 The Lifetime Achievement Award for Innovation recognizes an acknowledged innovator whose career accomplishments include innovations that have led to a long-term positive impact on the lives of others and who is an inspiring influence for other innovators. Wayne Thiebaud, emeritus professor of art, was conferred the award this year.

Thiebaud, a painter whose innovative work defined an era, is best known for his renderings of the everyday, including food displays, pinball machines, lipsticks and Californian landscapes and cityscapes using a singular illustrative style. His contributions to creative expression, popular culture and artistic form through his groundbreaking approaches to art, color and content have made him one of the most important painters of our time. Thiebaud joined the UC Davis Department of Art as an assistant professor in 1960, where he continued his career until retiring in 1991. After retirement, Thiebaud continued to teach classes at UC Davis, and has been an active volunteer adviser to the university. He is widely regarded as an inspirational figure by students, aspiring artists and those who admire his considerable body of creative work.

The Innovative Community Partner Award recognizes a leader or organization in the community that has contributed significantly to driving regional economic impact through innovation, entrepreneurship or support for growing the startup ecosystem in collaboration with UC Davis. HM.CLAUSE, a subsidiary of Limagrain, was recognized with the award this year.

HM.CLAUSE is a leader in agricultural innovation specializing in the breeding, production and sales of vegetable seeds. The company has a long history of productive and innovative engagement with UC Davis including the departments of Plant Sciences and Plant Pathology, the World Food Center, the Graduate School of Management and Venture Catalyst, within the UC Davis Office of Research. HM.CLAUSE is a key sponsor of the Seed Biotechnology Center’s Kent J. Bradford Endowed Chair in Seed Science, and in 2015 partnered to launch the UC Davis-HM.CLAUSE Life Science Innovation Center, the first startup incubator of its kind in the region.

Nominees for the Innovator of the Year Award