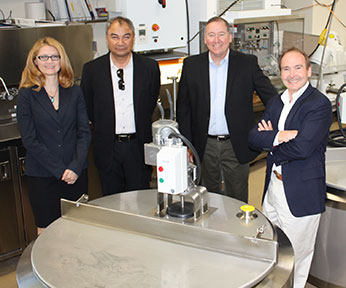 The founding scientists, all researchers at UC Davis, have over a decade of experience investigating infant nutritional health, with a focus on the key role of breast milk for creating a healthy intestine. Their proprietary bacterial technology, licensed from the university in June, has the potential to improve infant formula given to babies during their first six months of life. With novel probiotics and prebiotics, the company’s formula could normalize microbial imbalances that are known to occur in the infant gut.

The capital raised will fund the pre-commercialization phase of growth for the company, which just this week celebrated the grand opening of its office and lab space in Davis.

“Completion of the Series A round ahead of schedule is a reflection of both the importance of the groundbreaking discoveries of the company’s founders at UC Davis and a compelling business case that focuses on the improvement of the health trajectory for babies worldwide,” said David Kyle, CEO of Evolve, in a written announcement.

The investment was led by Hong Kong-based Horizon Ventures Ltd. and supported by seed stage investors in the company, including London-based Tate & Lyle Ventures and angel investors.

The UC Davis Office of Research played an instrumental role in this financing round. The Venture Catalyst unit, which supports entrepreneurial university researchers through the startup phase, facilitated the match between Evolve and Horizon Ventures in collaboration with the university’s Foundation Relations team.

“This would have been much more difficult without the excellent relationship we established with the university,” said Kyle.

Venture Catalyst worked closely with Foundation Relations within the UC Davis Development and Alumni Relations Office to leverage its network to help the university startup realize its potential.

“A unique characteristic of UC Davis is our collaborate capability in applying domain expertise and network assets to enable the success of faculty startups,” said Dushyant Pathak, UC Davis associate vice chancellor for technology management and corporate relations and executive director of Venture Catalyst. “The success of Evolve in achieving this important financing milestone is a perfect example of the synergistic conjunction of cutting edge research, effective business leadership and critical foundational university support.”

Evolve’s founding scientists include Bruce German, David Mills, Carlito Lebrilla and Daniela Barile, all of whom are investigators within the UC Davis Foods for Health Institute. Samara Freeman, assistant director of business development and operations for the institute, also currently serves as the VP of research and development for Evolve.

As part of its mission, UC Davis remains committed to university-led innovation and technology. And at the UC system level, President Janet Napolitano restated her support for moving breakthroughs into the marketplace in a blog post this week stating, “This is a key part of our mission as a public university: to equip our faculty, staff and students to be creative leaders and to advance promising research and entrepreneurship that benefits our society and our economy.”