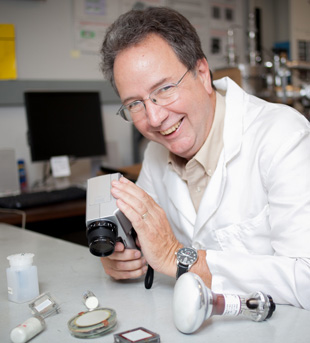 Another UC Davis technology could be on its way to the marketplace.

“[Our version of the most commonly used] A19 that replaces a 60-watt light bulb would probably come to market in the $4 range,” said Hunt. “It lasts 10,000 hours, which is 10 times the life of one of those light bulbs [currently on the market], and it doesn’t age by shifting color incorrectly.”

If it sounds too good to be true, it’s not. The technology is the culmination of almost two decades of research at the university. Now the electrical and computer engineering professor is set to have prototypes targeted to replace 4-foot fluorescent tubes and standard A19 light bulbs ready by end of summer. This latest step toward commercialization is thanks to a grant from the Office of Research at UC Davis.

Hunt was one of four recipients of last year’s Science Translation and Innovative Research (STAIRTM) grant, which awarded researchers up to $50,000 each to help bring university-generated discoveries to market. The STAIR grant program, administered by Venture Catalyst in the Office of Research, is now entering its second year and accepting proposals through May 4.

“Our STAIR grants are part of a suite of innovative programs at the university being spearheaded by UC Davis Venture Catalyst to enable the translation of research and intellectual property into commercial impact,” said Associate Vice Chancellor Dushyant Pathak. “Each of last year’s four award winners have leveraged their competitively awarded STAIR funding into commercial engagement opportunities.”

For Hunt, the STAIR grant provided an opportunity to work toward getting a tangible product in the hands of consumers — the type of thing that traditional grant sponsors typically do not fund.

“I just about came out of my skin when I saw the announcement of the STAIR program because I thought, ‘Wow, this is exactly to provide funding to accomplish what other research sponsors don’t,” said Hunt. “The only other people who are there to commercialize things are people who are looking for an opportunity to essentially take the technology and leave the people who invented it behind. The university really doesn’t want that. I don’t want that.”

Hunt came up with the idea for his light source, the field emission light, in 1997. In the years since, he’s been overcoming obstacles and improving upon, or matching, the benefits of current products. For example, Hunt’s technology uses only environmentally friendly materials, rather than the mercury found in most standard bulbs. And he’s addressed the fundamental expectations people have for something as ubiquitous as the light bulb.

Now, with the help of the STAIR grant, Hunt and his research team are bringing the goal to fruition. After the prototypes are ready, Hunt plans to have them independently tested to back up his claims. Then, he said, the technology will be ready to scale.

“There are literally dozens of standard configuration light sources that are used for everything [that we could consider targeting for our technology]. One example is theater lighting,” said Hunt. “There are billions of light fixtures used around the world, so it’s not like we are short on opportunity.”

Mentorship Has Its Privileges

STAIR grant recipients aren’t the only ones who can benefit from the program.

When it was developed, STAIR was given a mentoring component in order to add value through the engagement process. Finalists were provided with additional assistance and matched with mentors with relevant industry background.

One such finalist was Tony Simon, professor of psychiatry and behavioral sciences at the MIND Institute. He said he hit the jackpot as a finalist because Venture Catalyst matched him with Michael Richman, a UC Davis alumnus and successful entrepreneur in the biomedical field with deep experience building companies.

“To me, that’s been the tremendous outcome of all this,” said Simon. “Many of us are scientists who have not had much experience on the business end of things. Michael has been a fantastic support, incredibly generous with his time.”

“I liken this to a digital drug,” Simon said. “Targeting several potential disorders, [the game results in] the ability for kids to acquire new skills they weren’t capable of acquiring before. There is also an interesting secondary use that it’s just as appropriate for healthy aging, because this is all about spatial and temporal processing, which both decline with age.”

The next step? As he continues to gather data, Simon would like to build an even better prototype on which he can base a startup company or which can lead to licensing the technology to an outside company for further development and commercialization.