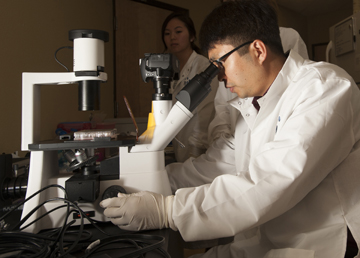 Davis-based biotechnology company Molecular Matrix Inc. started with what founder Charles Lee calls a simple observation he made in his kitchen at home.

What if he could improve on human cell growth in the laboratory by using a sugar-based substance?

Lee, a stem cell biologist who previously held core director positions at research centers at UC Davis, knew that existing 3-D cell culture systems have not yet reached full market potential for a variety of reasons including high prices or insufficient cell attachments and growth. Most researchers still grow cells in two dimensions, a method developed in 1885, even though it does not accurately represent our complex organ systems.

“The problem with this mono-layer approach is cells don’t behave the same way as [they do on] a 3-D environment, where they come from,” said Lee. “Going to 2-D is really a stretch there — to think cells will behave the same way outside the body on a mono-layer is a little absurd. But that’s how we’ve been doing our science.”

Using the sugar, the now-CEO made a scaffold capable of growing bone, heart, brain, cancer, liver, skin and stem cells in a 3-D environment. He further developed and tested his discovery at the university and found it could have a plethora of uses at market including regenerating skin for burn patients.

In some cases, such a technology could even replace animal testing in research, Lee said. The idea is that cells placed on the scaffold behave similarly to the corresponding cells that exist within the body. Drug testing could be done faster and more accurately, he added.

In 2011, UC Davis stepped up to aid Lee as he endeavored to commercialize his discovery, offering advice and resources, and eventually helping him found Molecular Matrix. The university’s support included everything from help with the patent process and intellectual property development to the legal component and capital-raising.

These efforts are not uncommon at UC Davis these days. Providing guidance to companies like Molecular Matrix helps fulfill part of the school’s mission to make sure related research has an impact in the outside world. It even helps boost the local economy, creating jobs and strengthening local expertise.

Since 2003, 62 startups based on inventions originating at UC Davis have been formed with institutional support. In 2013, a new unit launched with the intention of working closely with campus and local community resources to even better translate university research into commercial applications. The program, called Venture Catalyst in the Office of Research, offers a multitude of tools needed by startups to form prosperous companies, including mentoring sessions, access to a network of industry experts, legal support, incubation facilities and even deferred payment for services related to getting patents. It was launched in collaboration with the Child Family Institute for Innovation and Entrepreneurship at the UC Davis Graduate School of Management.

“Venture Catalyst helps our researchers do like entrepreneurs, by providing resources and directed support,” said Dushyant Pathak, associate vice chancellor for research, who also currently leads Venture Catalyst. “Molecular Matrix, with its committed and focused founding team, is exactly the type of company that can benefit from the support of Venture Catalyst and make a positive impact on society through its products and services.” 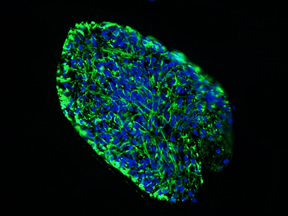 Molecular Matrix collected almost $500,000 last year as part of its first round of capital-raising and is now in its second round. (The firm budgets for one year at a time and allows individuals and institutions to invest.) In September, the company moved into a larger space in West Davis, where it can continue to build its business, including its growing mentorship program through which it employs almost 30 interns from the university.

And this year, the company plans to submit its technology to the Food and Drug Administration for use on skin and bone. Upon approval, chief operating officer Jim Keefer is ready to enter the marketplace. Potential buyers include hospitals, burn centers and dental clinics. The company plans to target at least seven global areas, including the European Union. A “CE” mark from the European Commission, which indicates compliance with EU regulations, would come after FDA approval.

“We want to stay nimble and dynamic so these markets will become more approachable as we grow,” said Keefer. “I can see potential for licensing across a multitude of different platforms.”

Going forward, Molecular Matrix will continue to test its technology with the goal of expanding its capabilities and bringing new functions to market. As Lee points out, he created a platform technology rather than an individual product. The hope is that it will be a foundation for many different opportunities after the required testing is done.

“I always talk about how genetics began,” said Lee. “What they brought to the world was a platform where you could actually make gene-based drugs, insulin, for example. It was followed by many different products. In the same way, what we are doing now is that platform for many things that follow.”