UC Davis is giving local startups a leg up with a new business incubator space.

The South Davis center’s launch, which will be celebrated on May 7, is part of the university’s larger effort to provide assistance to campus entrepreneurs — in particular those with technologies generated at UC Davis.

“Our startups are at their most vulnerable when they take their very first steps out of the familiar environment of the university and into the commercial setting,” said Associate Vice Chancellor Dushyant Pathak. “Access to business incubation space that brings together a diverse range of new ventures, along with structured support and startup resources, is an essential element of seeding the successful businesses of tomorrow. Our startups will grow to make an impact in our region.”

Pathak leads Venture Catalyst, a new unit formed by UC Davis to facilitate the translation of research and technology by driving the development of ventures with potential for commercialization. By offering an off-campus innovation center as part of its services, Venture Catalyst gives university startups a new level of independence.

Since 2003, 62 startups have been formed from discoveries made at UC Davis, with 14 of them founded in the last year. 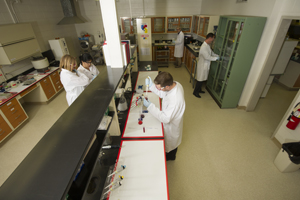 The new center currently houses three companies looking to capture a spot in the marketplace.

One company, DtoR, Inc., shows how quickly a good idea can take shape. Paul Feldstein, CEO and an assistant project scientist at UC Davis, came up with an idea for fast and powerful analysis of transcription, or copying DNA into RNA, in October. He wrote the invention disclosure in November and DtoR (literally “DNA to RNA”) was born that same month.

“I feel like we went from zero to 60 in a very short time, but because this is in my area of scientific expertise, I felt like we could move very quickly and we have,” said Feldstein. “We know the technology works, now we’d like to see how far we can apply it.”

Potential applications are broad: The technology can aid in the production of more finely tuned promoters for making proteins, biofuels and even vaccines for otherwise uncured viruses like herpes simplex 2.

Don Gibson, a second-year graduate student in the integrative genetics and genomics graduate program, is also looking at DNA as part of Bio Mobile, Inc.

“We’re developing a portable, user-friendly and rapid DNA testing device to test a broad range of systems,” said Gibson. “We’re hoping to be able to test whether there are GMOs in your food, what fish you are receiving, if there are plant pathogens, and what meat is in your sausage.”

The technology, which is still in the prototyping phase, would be targeted to companies and regulatory bodies, with a long-term goal of creating a medical device for humans.

“The same core technology can do DNA testing for any kind of system,” said Gibson. “Hopefully in under an hour, you would be able to go into a clinic, swab your DNA, and be able to test against genetic diseases, for example. All that in the time that you can read a magazine.”

Inserogen is building on its concept of using tobacco plants as “biofactories” that can make high-value proteins such as therapeutics for orphan and rare diseases quickly and cost effectively. It was the 2010 first prize winner of the Big Bang! Business Plan Competition run by the university’s Child Family Institute for Entrepreneurship. Since then, Inserogen has been awarded more than $250,000 in funds to prove its concept and develop a marketable plan.

For all three, the next steps include additional testing and securing more capital through a combination of grants, corporate partnerships and equity investment.

Support Beyond the Facility

The UC Davis – HM.CLAUSE Life Science Innovation Center is the first off-campus member of the university’s distributed research incubation and venture engine (dubbed the DRIVE network). Each company accepted into the DRIVE program has full access to the support resources offered by Venture Catalyst, including a suite of services provided through START, a special program designed specifically to help grow robust technology startups.

“Through Venture Catalyst, we provide a comprehensive set of enabling services and resources for the benefit of university entrepreneurs developing diverse technologies in all disciplines campus-wide. Effective collaboration is essential to achieving this objective and we are thrilled to enhance our effective internal partnerships,” said Pathak, noting joint work with the university’s Institute for Innovation and Entrepreneurship, College of Engineering and now HM.CLAUSE.

HM.CLAUSE has been a strong partner, managing the physical space and lease agreements. That assistance is already having a real impact, said DtoR’s Feldstein.

“Without this innovation center, we couldn’t do it,” he said. “No one could start a biotech company without an incubator, because the equipment is simply too expensive for small companies to afford. An incubator really makes it possible. And that’s exciting because this might be the most significant thing I’ve ever done in my life.”