Water usage may be California’s No. 1 topic in 2015 — and last year and the one before that. As the state enters its fourth year of drought, everyone is seeking new options for monitoring and usage of this precious resource.

In September, Governor Jerry Brown signed groundwater legislation, paving the way for new regulations on pumping in California and allowing local agencies to oversee extraction. The total statewide economic cost of the 2014 drought is $2.2 billion, resulting in the loss of 17,100 seasonal and part-time jobs, according to an impact report from UC Davis scientists.

Enter Tule, a new business formed with the strength of UC Davis research behind it. With a sensor and monitoring system installed above the crop canopy (and tapped into the irrigation line), the company can accurately tell growers how much water their plants are using and even when and how much to apply. The San Francisco-based startup was one of 14 launched last year with UC Davis support.

“Irrigation is the most important decision a farmer makes,” said Tom Shapland, CEO of Tule. “Irrigation, more than any other factor, is going to influence how much yield — how much produce — they get from their field and the quality of that produce.”

And while some water deficit, or stress for the plant, is beneficial during discrete development stages of the growing process for some crop types, farmers want to control the time and degree of deficits, too. The technology can help minimize waste during drought, but the device is essential even with plenty of rain because it helps with overall water efficiency, Shapland added.

“This isn’t a technology that is only helpful in periods of drought,” he said. “Our technology helps with that most important part of agriculture — irrigation management, [which determines quality and yield].” 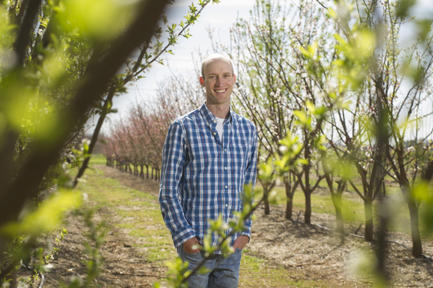 The Science of Irrigation

As a student at UC Davis, Shapland worked with his dissertation committee, Kyaw Tha Paw U, Rick Snyder and Andrew McElrone. Paw U, a professor in atmospheric science, had developed a technology for calculating water usage in fields in the 1990s. The problem was that it needed to be calibrated for each location and the process required expensive equipment. That issue formed the basis of Shapland’s master’s and PhD work in the Horticulture and Agronomy Graduate Group (he graduated in 2012) within the College of Agriculture and Environmental Sciences.

By solving the calibration problem, Shapland, Paw U, Snyder and McElrone were able to make the technology relatively inexpensive for growers.

The sensors are unique compared with what has previously been available to growers for two reasons: They determine the crop’s water use over a broad area — as much as 10 acres with a single device — and they provide absolute measurements. Other technologies available are too expensive for use outside the laboratory, manage only one plant at a time or simply offer estimations, Shapland said.

With Tule, farming meets high tech in a new way. Growers can access data in real time through an online dashboard that is accessible from anywhere. And they don’t have to worry about installation or maintenance. Shapland and his team take care of the hardware, selling the data to growers for $1,500 per sensor per growing season.

When Shapland tells growers about his technology, he said they sometimes respond with an expletive — not because the science eludes them, but because for so long such data has not been available to them.

Tule boasts about 60 customers with 250 sensors, stretching from as far north as Lake County, California, all the way down to Oxnard.

Doug Fletcher, vice president of winemaking for the Terlato Wine Group, has had Tule sensors at Chimney Rock Winery in Napa, California, for about a year now.

“By being able to measure what’s been very difficult to do in the past, namely how much water the plant is using, we now have a better handle on how we then apply what we want to the plant to get it to do what we would like it to do,” said Fletcher, who added the system has helped the decision-making processes at Chimney Rock.

In fact, Fletcher said, he learned that his plants were using much more water than they received from irrigation, information that could have a real impact.

“The plants out here use about 10 or 12 gallons per week. We were putting on about six gallons, so that meant the other six gallons came out of the dirt, which we really just didn’t think about,” said Fletcher. “With the groundwater law that Gov. Brown passed [last year], this gizmo is going to give farmers a chance to say to the state, ‘If you want me to grow something, this is what I need to have.’ This is a good way — because the science is behind it — to demonstrate how much water we’re really using. That’s kind of exciting.” 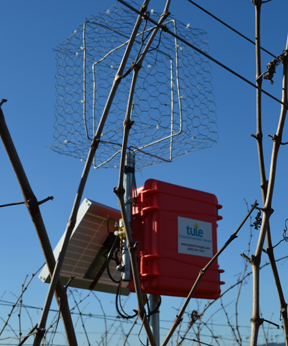 With a sensor tapped into the irrigation line, Tule can measure exactly how much water a crop uses. (Sean Moody/UC Davis photo)

Shapland licensed the foundational intellectual property for his company from UC Davis, which he said has been a key driver behind Tule’s success so far. Now, as Shapland makes the rounds meeting with growers across the state, the entrepreneur said the university name goes far.

“In California, growers know they can trust UC Davis. They’ve seen research come out of UC Davis again and again that has brought their farming operations [up a notch],” Shapland said. “When they hear about a technology that came out of Davis, that can do something they’ve needed, they know they can trust it.”

Tule’s success has been enabled by Venture Catalyst, a new unit within the Technology Management and Corporate Relations division of the Office of Research, led by Associate Vice Chancellor for Research Dushyant Pathak.

“As a creative entrepreneur, Tom was able to effectively leverage university resources to help achieve his startup’s objectives,” Pathak said. “He is the perfect example of the type of innovative, focused and passionate entrepreneur we foster at UC Davis. In founding Tule, he recognized the potential for translating his research into commercial impact while creating valuable societal benefit.”

Venture Catalyst works closely with campus and local community resources, including the university’s Mike and Renee Child Family Institute for Innovation and Entrepreneurship, to support the translation of university research into commercial applications.

“I can’t speak enough about how grateful I am to have been a part of this [process] and how important it has been [for Tule],” said Shapland.

Tule has come a long way in one year. Last summer the prestigious startup incubator Y Combinator invested $120,000 in the fledgling firm. The money supported a three-month proof-of-concept process. From there, the company raised more than $1 million in venture capital from Khosla Ventures, Bloomberg Beta and others.

The five-person team is currently growing, as the company seeks to hire additional software engineers to help continue to hone the technology and make the data even easier to understand.

With about 90 percent of Tule’s customer base coming from the winemaking industry, the team aims to expand to almond, strawberry and tomato growers this year. Additional crops will be further down the pike.

Going forward, technologies such as this could help address the issue of food scarcity. As UC Davis’s World Food Center aims to develop the key to feed the world’s generations to come, Tule may become one of many examples of companies playing a role in the solution.

“When we’re recruiting [farmers] we tell them there are going to be billions more people on this planet in the next 50 years. So you have to be able to get more food with the same amount of water and fewer resources,” said Jeff LaBarge, chief technology officer for Tule. “The drought may make the problem more acute, but in the long term, being able to feed billions more people in the next 50 years is really the mission.”

He added, “Our goal is to have a sensor on every farm in the world. It’s just a matter of getting there as quickly as possible.”