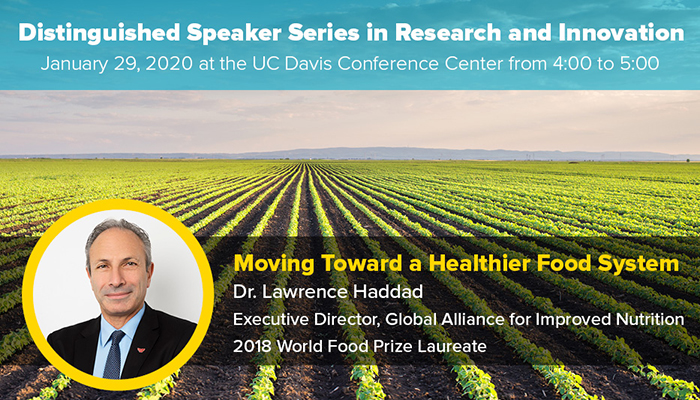 The Distinguished Speaker Series in Research and Innovation will bring accomplished thought leaders from around the world to UC Davis to share their vision for the next generation of research and how it can transform our society. The series will be hosted by the Office of Research in partnership with research units across campus.

The inaugural event will be held January 29, 2020 with British economist and food policy researcher Lawrence Haddad discussing how we can move toward a healthier food system.

In 2018, Haddad was awarded the World Food Prize for his “relentless leadership and advocacy in mobilizing political will to make nutrition the focal point of development strategies.” Haddad is executive director for the Global Alliance for Improved Nutrition, a Swiss-based foundation launched at the United Nations in 2002 to tackle the human suffering caused by malnutrition.

“I am thrilled to have such a prominent thought leader join us to kick off this new series,” said Prasant Mohapatra, vice chancellor for research. “Dr. Haddad’s accomplishments and vision exemplify the intent to evoke discussions and ideas that will charter new approaches to address some of society’s most pressing challenges.”

The first event of the series is being cohosted by the Institute for Global Nutrition, which coordinates research and training activities concerning human nutrition problems of low-income countries, and of ethnic minorities and disadvantaged groups in the United States.

Registration for the inaugural event at the UC Davis Conference Center is open to the research community, students and public.

The speaker series events will occur once per quarter — excluding summer. The second event is scheduled to coincide with the annual UC Davis Research Expo on May 14, 2020.