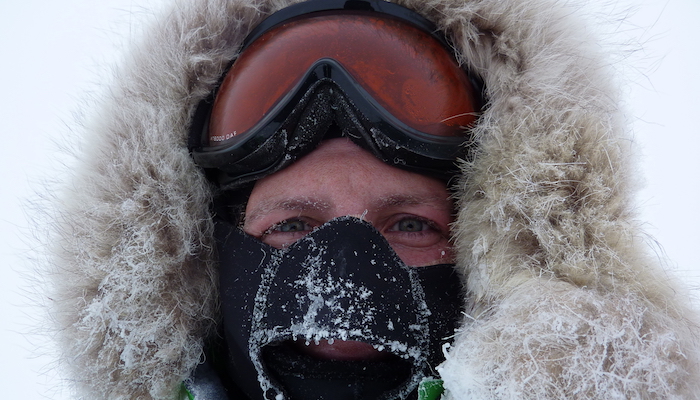 The first woman to ski alone across Antarctica, a professor who has written a book about the offbeat ephemera of polar expeditions, a painter who spent three months camping in Antarctica, and a poet-naturalist who has been a guide in some of the globe’s most remote places will converge at UC Davis on April 5 for Polar Day 2019.

The free, half-day event is hosted by the Polar Forum, an initiative of the John Muir Institute of the Environment, and is open to the public and the UC Davis campus community.

“Polar Day might seem like an unexpected focus for a university in California’s Central Valley, but there are more than 40 scientists at UC Davis with research activities in the Arctic or Antarctic,” said Ben Houlton, director of the Muir Institute. “And the science is telling us that climate disruptions in the polar regions are actually causing more severe droughts and extreme weather here in California.”

Eric Post, director of the Polar Forum, and a climate change ecologist in the UC Davis Department of Wildlife, Fish and Conservation Biology, conducts long-term field observations and experimentation in the Arctic. The Polar Forum launched in 2018.

“We’re excited to celebrate ‘Women in the Polar Regions,’ this year’s theme for Polar Day. This is the premier annual public outreach and engagement event of the Polar Forum, and a powerful way to highlight characteristics of the polar regions that are particularly vulnerable to climate change,” said Post. “Each of the women featured in this year’s event bring a unique perspective and compelling message to Polar Day. It’s also our way of honoring the legacy of Californian Louise Arner Boyd, who led several pioneering scientific expeditions to arctic Greenland in the 1930s.”

The agenda for the day is designed to explore the history, beauty and ecological significance of the polar regions.

British polar explorer Felicity Aston became the first woman to ski alone across Antarctica in 2012, earning her a place in the book of Guinness World Records. In 2018, Aston led an international all-women team, the Euro-Arabian North Pole Expedition, which skied to the North Pole. She is the author of Alone in Antarctica.

Hester Blum, an associate professor of English at Pennsylvania State University, is the author of a new book, The News at the Ends of the Earth, which looks at the rich, offbeat collection of printed ephemera created by polar explorers, ranging from ship newspapers and messages left in bottles to menus and playbills.

Artist Lily Simonson works in tandem with researchers at remote field sites to create paintings of extraordinary organisms and extreme environments – from the deep sea to Antarctica. As the NSF Antarctic Artists and Writers Program Awardee, Simonson spent three months scuba diving beneath the sea ice and camping in Antarctica.

Poet and writer Elizabeth Bradfield has worked as a naturalist and guide on ships in Antarctica and has written a mixed-genre book, Toward Antarctica. The book uses photographs, compressed prose, and short poems to offer a unique view of one of the world’s most iconic wild places.

The day will cap off with short presentations by Polar Forum researchers followed by a book signing by Aston. Register online for #polarday2019 at: http://ow.ly/Megc30o0qPr