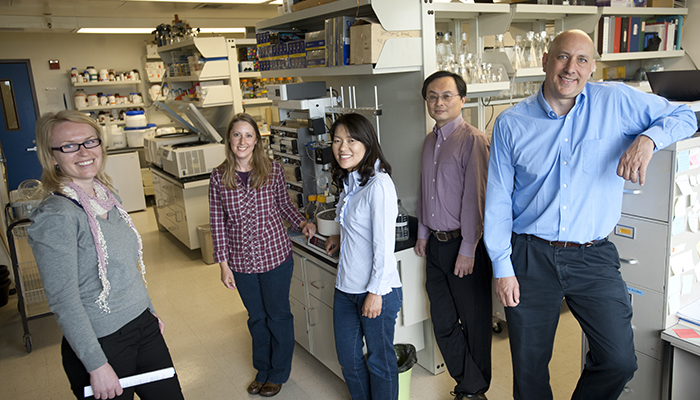 The Science Translation and Innovative Research (STAIRTM) Grant gave John Voss and his team the opportunity to demonstrate early proof-of-concept and gain access to entrepreneurial and technology commercialization support resources to advance the innovation.

In 2020, an estimated 5.8 million Americans aged 65 years or older had Alzheimer’s disease. This number may well hover around 14 million by 2060, according to the Centers for Disease Control and Prevention. Years of research led by UC Davis Professor John Voss may play an important role in treating Alzheimer’s and other protein misfolding diseases that occur in the brain.

Voss, a professor in the Department of Biochemistry and Molecular Medicine, is developing a unique approach to treating such protein misfolding diseases by using paramagnetic molecules to diagnose and monitor the disease conditions. His contributions in this field led to the launch of ParaMag Biosciences, a company which recently executed license agreements to access foundational intellectual property and commercialize new technologies developed at the UC Davis.

Voss has been working in the area of structural biology, specializing in protein dynamics and assembly, since he joined UC Davis in 1998. In 2017, Voss received the Science Translation and Innovative Research (STAIRTM) Grant offered by Venture Catalyst – within the Innovation and Technology Commercialization division of the UC Davis Office of Research. The award afforded Voss and his team the opportunity to demonstrate early proof-of-concept and gain access entrepreneurial and technology commercialization support resources to advance the innovation.

When proteins lose the native structure either by mutation or environmental effects, they are typically identified and cleared by the cell.  However, elevated levels of misfolded proteins —accumulating either by increased production or decreased clearance — can lead to disease. In the disease pathway, oxidative stress and associated inflammation in response to aggregates of misfolded proteins act as critical mediators of cell death. Protein misfolding can lead to not only Alzheimer’s, but several disorders, including neurodegenerative and skeletal muscle diseases such as Parkinson’s and Huntington’s diseases.

Voss’ research has been primarily focused on protein structure and dynamics. He studies molecular switching in proteins, as well as protein folding and assembly. Voss explains that intrinsically disordered or misfolded proteins don’t necessarily retain a single well-defined architecture or structure. “Instead, they move around a lot and tend to aggregate or misfold, and therefore are much harder to pin down,” he said.

Voss has been particularly interested in these types of proteins to understand how they work with their high levels of intrinsic disorder. “We can get a lot of information by looking at how things move and how much order disorder they have,” said Voss. 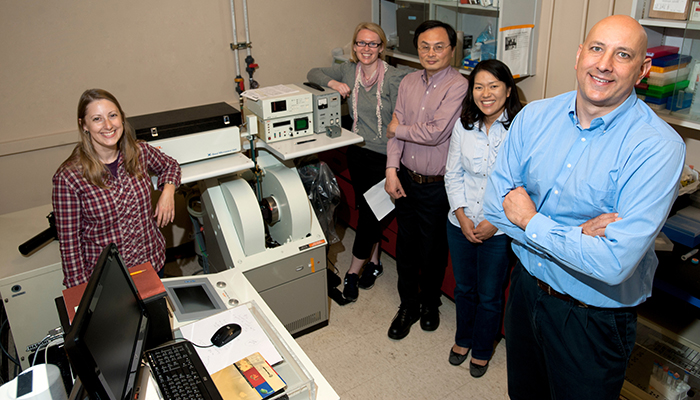 The goal was then to design a mechanism that can enter cells and prevent the toxic event of protein misfolding. To carry out this work, Voss and his team have developed a tool called Electron Paramagnetic Resonance (EPR) spectroscopy, which introduces “spin probes” –– unique paramagnetic molecules with unpaired electrons –– that can bind on to these misfolded proteins and report on their dynamics and degree of aggregation.

Collaborative studies with Lee-way Jin of the UC Davis Alzheimer’s Disease Center led to the observation that these spin probes carry some unique properties, such as, they can deliver potent antioxidant activity in a catalytic manner. Based on this observation, Voss embarked on designing spin probe agents that can assemble around the neurotoxic proteins and reduce their toxicity in cells.

Another key property of the innovation results from the ability of the agents to generate contrast in magnetic resonance imaging (MRI), which then can be used as a diagnostic tool and understand the course of treatment. “We use this approach to address problems in several biological systems, including those related to cardiovascular and neurodegenerative diseases,” said Voss. “Unlike available imaging methods, the MRI contrast does not involve metals, eliminates radiation exposure to the patient, and is less expensive — enabling greater patient access,” said Voss.

Voss used the STAIR grant to get access to imaging instrumentation, collected specimens from animals as well as from patients in the UC Davis Alzheimer’s Disease Center, and used them to validate the hypothesis that these paramagnetic molecules can be used in a diagnostic manner.

They performed in vivo tests to synthesize and demonstrate the effectiveness of nine novel small molecules, co-invented by Ruiwu Liu, a research professor in the School of Medicine. They also conducted lead optimization studies of therapeutic activities and used imaging instrumentation to better correlate the contrast signal with identifiable brain structures.

Voss’ laboratory has engineered a series of proprietary spin-labeled agents that preferentially bind to aggregates of misfolded proteins and provide neuronal protection from toxic effects of amyloid-beta. These molecules have been termed paramagnetic amyloid ligands (PALs) as they are not only neuroprotective but also can be visualized in the brain with MRI. Voss’s efforts with the Davis-based ParaMag Biosciences are aiming to bring the UC-licensed PAL technology to patients.