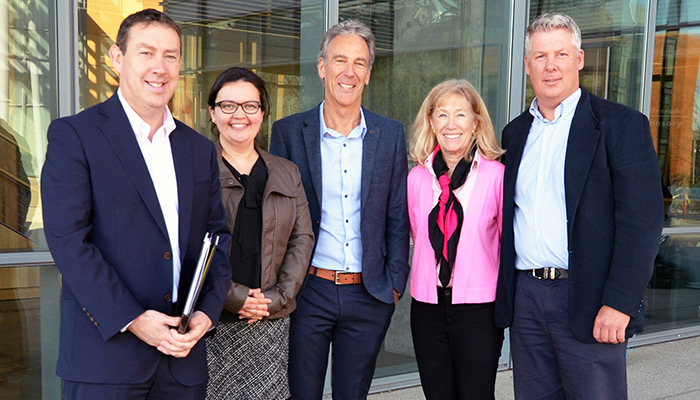 The University of California, Davis announced a partnership with CSIRO, Australia’s pre-eminent national science organization. The partnership marks the first major collaboration agreement between CSIRO and an American university.

The five-year partnership agreement encourages scientists and research facilities across the globe, including more than 4,500 CSIRO scientists, to seamlessly collaborate across disciplines including, but not limited to agricultural and environmental sciences, engineering and veterinary medicine. Additional outputs of the partnership include:

“These types of collaborations and partnerships are helping US companies leverage the incredible resources of Australia’s pre-eminent national science organization, giving them a global advantage in bringing new technologies to market,” said Susan Lucas-Conwell, executive vice president of CSIRO US. “UC Davis’ core competency in agriculture as well as other disciplines, is a great fit for many CSIRO scientists and we look forward to the positive advancements that can be achieved when these two organizations collaborate.”

“We are delighted to announce this exciting research partnership between CSIRO and UC Davis,” said Paul Dodd, associate vice chancellor for research at UC Davis. “With the establishment of this collaboration, we have a great opportunity to accelerate our respective research programs by having our best scientists and engineers work together to address some of the most pressing challenges in the global agrifood sector.”

The collaboration was initiated by a joint effort involving the Office of Research and Office of Global Affairs, following CSIROs decision to open a U.S. base in California in May 2017. Subsequent discussions in California and at CSIROs headquarters in Canberra, Australia led to the signing of an Agreement of Collaboration. Over 50 faculty and researchers from across a number of UC Davis schools and colleges attended a public talk by CSIROs Division of Agriculture and Food hosted at the Mondavi Institute for Wine and Food in February 2018, confirming the strong potential for the partnership.

“Our collaboration with CSIRO provides a unique opportunity in bringing together two world-class institutions that are conducting important research in the areas of food, and agriculture to address global challenges,” said Joanna Regulska, vice provost and associate chancellor of Global Affairs at UC Davis. “It is only through these strong cross-border and interdisciplinary collaborations that global challenges can be solved.”

CSIRO, Australia’s premier national science organization and inventors of the Wi-Fi technology found in over five billion devices today, employs a team of more than 4,000 world-class scientists, engineers, technologists and economists to deliver solutions for some of the world’s most challenging problems.

Through innovative technology development and ground breaking research, we imagine, innovate, and collaborate with global partners, including Boeing and The Gates Foundation, to provide the commercially relevant technological solutions necessary to advance innovation and change the world.