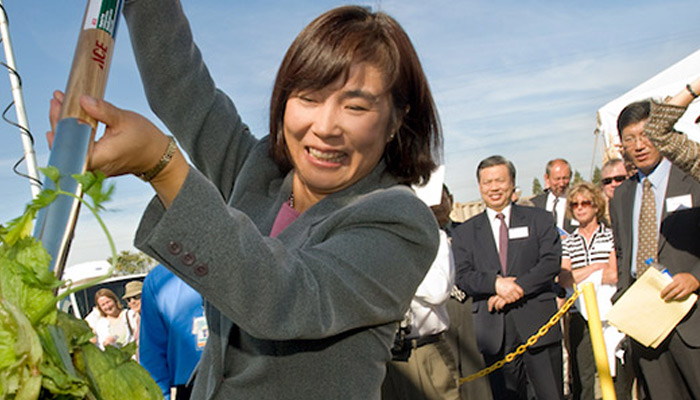 1. Soil Actually Has a Microbiome

Soil has one of the most diverse ecosystems on the planet. (Gregory Urquiaga/UC Davis)

Gut bacteria have been getting a lot of attention lately (yogurt, anyone?) but it turns out the soil in your own back yard is teeming with microbial life. According to Kate Scow, a professor of soil science and microbial ecology, a quarter teaspoon of soil can easily contain a billion bacterial cells. And she estimates there can be 10,000 to 50,000 different taxa of microbes in a single teaspoon. Soil is one of the most complex and diverse ecosystems on the planet, and it is one that is essential for human life through all the functions it provides: the breakdown of organic materials, food production, water purification, greenhouse gas reduction, and pollution cleanup, just to name a few.

Yep, that actually happened! Soil microbes were included in a batch of 48 microbes flown to the International Space Station (ISS) in 2014 for study. Project MERCCURI originated as a citizen science project led by Wendy Brown, a biomedical engineering Ph.D. candidate, and David Coil in Jonathan Eisen’s lab at UC Davis. Microbes were collected by students and citizen scientists at locations all over the country, including the Liberty Bell, a variety of football stadiums and the kitchen of a TV station in Minneapolis. The majority of microbes were fairly blasé about microgravity, growing pretty much the same on the ISS as they did on earth. There was one mysterious outlier, though: the salt-tolerant, Bacillus safensis. B. safensis grew 60 percent better in space than on earth, the significance of which is still being investigated.

About 30 percent of the material in urban landfills is made of organic waste, everything from lawn clippings to that old bag of spinach you discovered hiding in the back of your refrigerator (the USDA estimates food waste in the U.S. at a whopping 30 to 40 percent). But at UC Davis, organic waste from the dining halls, animal facilities and grounds are being put into an anaerobic digester where microbes — including soil microbes — break down the organic compounds and create methane, which is then used to generate electricity. Dr. Ruihong Zhang, professor of biological and agricultural engineering at UC Davis, developed the technology, seeing the potential of microbes to convert organic waste into renewable energy. After the “digestion” is done, the leftover sludge, which still has beneficial nutrients and microbes, is used for compost.

4. Soil Microbes Can Suppress a Fungus that Kills up to 30 Percent of Rice Crops

Rice in a greenhouse at UC Davis being grown for seeds. (Gregory Urquiaga/UC Davis)

Rice is one of the world’s biggest crops (second only to corn). The Food and Agriculture Organization of the United Nations estimates that worldwide nearly 492 million tons of rice were produced last year. But rice is vulnerable to a fungal infection called blast which is estimated to kill up to 30 percent of the world’s rice crops. Working with researchers from the University of Delaware, Venkatesan Sundaresan, a professor plant sciences and plant biology, identified a soil microbe (Pseudomonas chlororaphis EA105, in case you are curious) that can suppress this fungal infection, and could aid in global food security. Sundaresan’s lab has identified more than a quarter-million bacterial species (and counting) in the rice microbiome.

5. Soil Microbes May Be Able to Help Climate Change

Scientists are looking at numerous ways to lower global carbon dioxide levels by keeping carbon out of the atmosphere. UC Davis researchers have studied whether various conservation agriculture techniques—like not tilling the soil or putting in cover crops—can increase the amount of carbon in the soil. It turns out those techniques can. One study showed an increase from about 8.8 tons of carbon per acre, to about 12.9 tons per acre, or an increase of about 45 percent. What transform a cover crop into more carbon in the soil? You guessed it: the soil microbiome. Microbes are remarkably adept at breaking down the dead plants left in the soil and transforming the plant carbon into things like humus, which can remain in the soil.

Read More
← Plant Genes May Lack Off Switch, But Have Volume Control Invasion of the Poultry Manure Microbes. Or Maybe Not. →