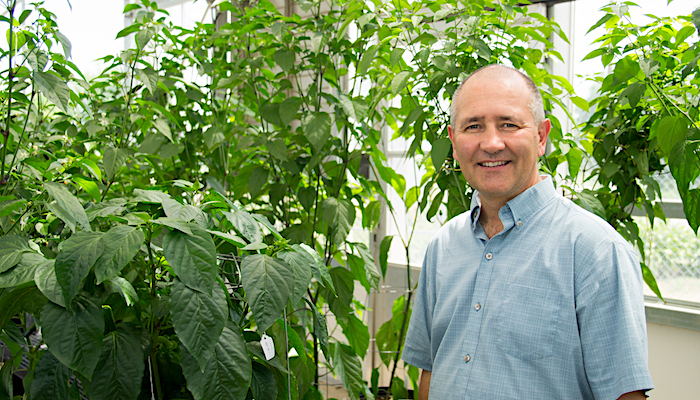 Allen Van Deynze, director of research at the Seed Biotechnology Center and associate director of the Plant Breeding Center at UC Davis, was awarded the Academic Federation’s 2019 Excellence in Research Award tonight at a ceremony on campus. Van Deynze has conducted groundbreaking research in Mexico and in Africa and has received more than $12 million in research funding since 2012.

This is the 20th year for the award, which recognizes the vital role Academic Federation members play in advancing research excellence at UC Davis. The academic appointees represented by the Academic Federation span a range of disciplines and comprise 22 academic titles, including lecturers, instructors, researchers, health care practitioners, librarians, and others.

“Allen Van Deynze’s research and leadership exemplifies the scientific excellence and global impact UC Davis is known for,” said Prasant Mohapatra, vice chancellor for research at UC Davis. “His work has the potential to dramatically improve agricultural sustainability, productivity and nutrition for a wide variety of essential crops.” 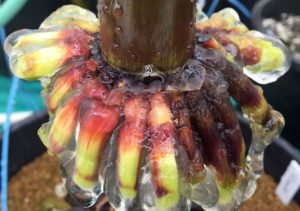 Sugar-rich mucilage, a gel-like substance, found in an indigenous corn from the Sierra Mixe region, provides the low-oxygen and sugar-rich environment required to attract bacteria that can transform nitrogen from the air into a form the corn can use. (Jean-Michel Ane/UC Davis)

Van Deynze is the lead author of a landmark study that determined how indigenous varieties of maize in the Sierra Mixe region of Mexico are able to fix nitrogen from the atmosphere, instead of requiring synthetic fertilizers. The research team, led by Van Deynze and Alan Bennett at UC Davis, partnered with Howard-Yana Shapiro at Mars, Incorporated, and members of the local indigenous community.

This discovery opens the door to improving food security for countries that do not have access to affordable nitrogen fertilizer for corn crops. It could also lead to a significant reduction of fertilizer use for corn and a subsequent reduction in greenhouse gases. Fertilizer production is an energy-intensive process, responsible for 1 to 2 percent of global greenhouse gas emissions. Overuse of nitrogen fertilizer also leads to a range of environmental problems when it is released into the atmosphere as nitrogen oxide or washes into waterways.

In addition to directing the research of the Seed Biotechnology Center, Van Deynze is the scientific director of the African Orphan Crops Consortium, a partnership between UC Davis, Mars Incorporated, the Alliance for a Green Revolution of Africa, the African Union, the World Agroforestry Centre and biotechnology companies. The goal of the project is to improve the nutrition, yield and disease-resistance of traditional crops in order to address hunger, malnutrition and stunting (impaired growth and development in children due to poor nutrition) in Africa.

Van Deynze’s research has resulted in 19 peer-reviewed publications in the last three years, and citations have increased to more than 500 per year in 2016, 2017 and 2018.

Van Deynze received his B.S. and M.S. from the University of Manitoba, Canada, and his Ph.D. in Plant Breeding from the University of Guelph, Canada. He joined UC Davis as a senior professional research scientist in 2002. Van Deynze received a lifetime achievement award from the International Pepper Conference in 2018. He is also the recipient of the 2016 National Council of Commercial Plant Breeders’ Public Plant Breeding Award.

About the Academic Federation

The UC Davis Academic Federation represents members of 22 academic titles and is one of the five official campus constituencies. It is the only organization of its kind in the whole University of California system. Members are unique in that they are academic appointees who are neither staff nor Senate faculty members. The Academic Federation promotes the ideas and interests of its members to campus administration and other stakeholders, often working closely with the Academic Senate on matters of mutual importance. The Academic Federation helps members present a cohesive, respected voice when collaborating with campus and constituent leadership.