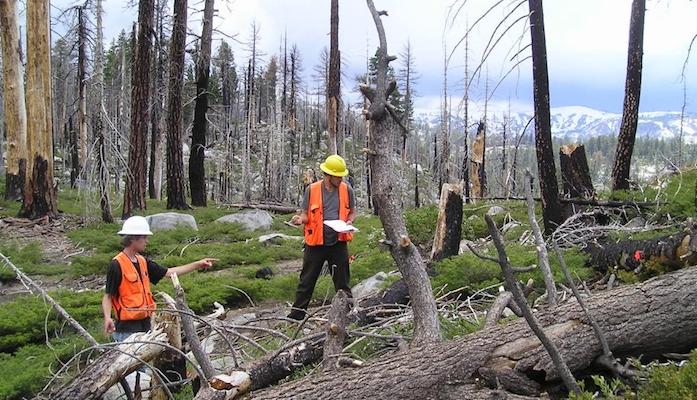 A study spanning 10 national forests and 14 burned areas in California found that conifer seedlings were found in less than 60 percent of the study areas five to seven years after fire. Of the nearly 1,500 plots surveyed, 43 percent showed no natural conifer regeneration at all.

The study was co-led by UC Davis and the USDA Forest Service and published December 21 in the journal Ecosphere. It presents a tool to help foresters prioritize which lands to replant immediately after a fire, and which lands they can expect to regrow naturally.

“High-severity fires are knocking out seed sources and leading to a natural regeneration bottleneck, which poses a predicament for the sustainability of our forests,” said lead author Kevin Welch, a research associate with the UC Davis Department of Plant Sciences.

For example, 10 of the 14 burned areas in the study, which include well-known wildfires like the Moonlight (2007) and Power (2009) fires, did not meet Forest Service stocking density thresholds for mixed conifer forests, making them good candidates for replanting and restoration efforts.

“Knowing that the Forest Service doesn’t have the time, budget and staffing levels to restore everything, we basically want to help foresters predict what will be there five to seven years later so they can better focus restoration efforts,” Welch said.