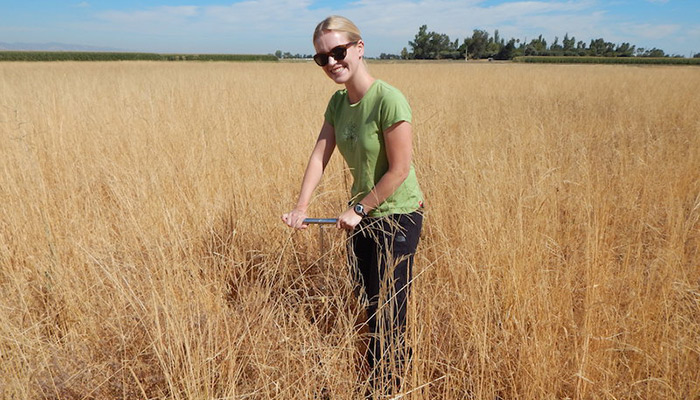 Adding compost to soil introduces needed carbon and nutrients, but less is known about what happens to the existing microbiome.

As a doctoral student at UC Davis, Kelly Gravuer, now a postdoc with Arizona State University and The Nature Conservancy, decided to explore these questions.

Gravuer then added composted poultry manure to the three soil types and used DNA sequencing to track the microbiome species at days four and 32. What she found wasn’t so much an invasion as a small infiltration.

But the invasion of new species of microbes from the compost – and the overall effects of compost on the resident community – differed depending on the type of soil.

Experiments with plant invasion models has found that adding resources to resource-poor environments, like the soil from the wheat field, can increase the resident community diversity.

“We thought we might see similar patterns with our soil communities, but instead we found the opposite. The no-input soil became less diverse. Clearly, we still have a lot to learn about how to translate knowledge gained from plant and animal experiments to the vastly different world of microbes,” Gravuer said.

She notes that If preserving microbial diversity is an important management goal in a low-nutrient soil, adding compost may not be the best way to go. But if increasing the abundance is important – as it often is for goals such as suppressing disease and soil carbon sequestration – then the tradeoff might be worth it.

As a caveat, she notes the experiment was done in jars in the lab. “The next step would be to confirm that these patterns also occur in the field plots themselves,” said Gravuer.