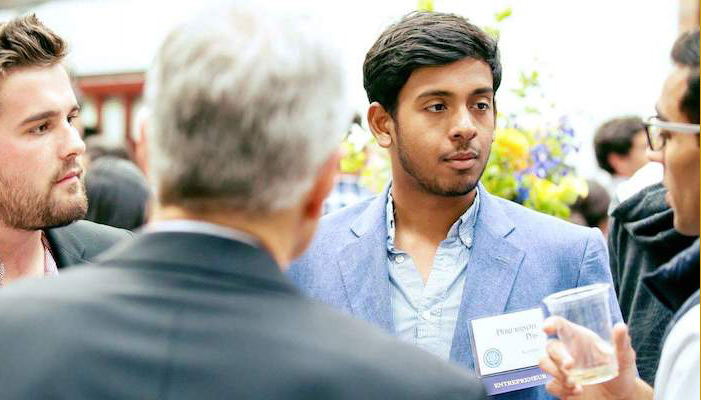 Wazlo co-founders Joshua Brown and Dhrubajyoti Das at a Cal Founders networking event in San Francisco, May 2016. They hope to use artificial intelligence and a friendly bot named Wazlo to change how employees are recruited in the gig economy. (Credit: Wazlo)

What if, instead of filling out a boring online form to apply for a job, you could just have a chat with a friendly bot using Facebook messenger?

That’s the idea behind Wazlo, a Davis-based startup that wants to change how prospective employees are vetted by utilizing artificial intelligence and a chat bot named Wazlo. 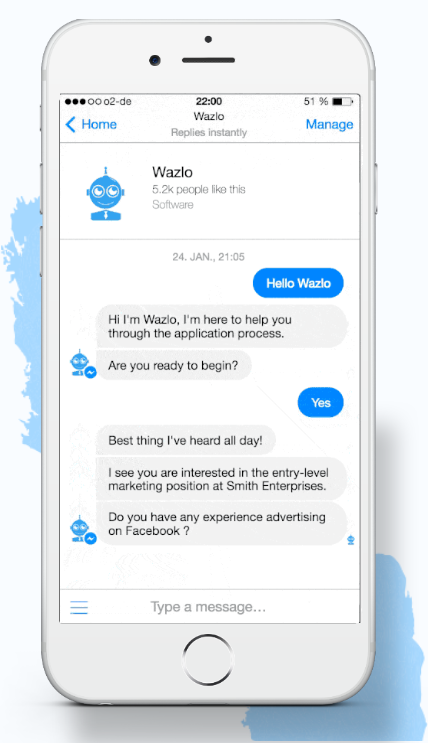 Instead of filling out an online form, prospective employees can have a chat with a bot on Facebook Messenger. (Credit: Wazlo)

“It’s funny. Quirky,” said Dhrubajyoti Das, one of the company’s co-founders. “If Wazlo messes up it will make a sarcastic joke, or say something like ‘Sorry, I’m still learning.’”

Das and his Wazlo co-founder, Joshua Brown, are part of the growing community of undergraduate entrepreneurs at UC Davis. Das grew up in Mumbai, India, and said he became interested in programming and building e-commerce websites as a way to make pocket money when he was a teenager. Even though they are only seniors in college — Brown is taking a break from his bachelor’s degree in computer science and Das is planning to stay for an additional year to complete his bachelor’s in economics — Wazlo is not their first entrepreneurial venture as students.

Their first startup, which they worked on with Alex Avalos, a computer science student at West Hills Community College, was Ag for Hire. The team developed Ag for Hire at the UC Davis Apps for Ag Hackathon in December 2015 as a way to connect contract farmworkers looking for work with farmers looking to hire. It was billed as a “LinkedIn for agricultural labor,” and went on to win not only the hackathon but also the Innovation in Food & Agriculture Award at the 2016 Big Bang competition at UC Davis.

Ag for Hire’s success created opportunities for Das and Brown. The UC Davis Venture Catalyst unit helped them set up their business structure and incorporate (Wazlo, Inc., is a C-Corporation). They got to attend the Thought For Food Global Summit in Zurich, Switzerland. They were accepted to CITRIS Foundry, a business accelerator program based at UC Berkeley but available to entrepreneurial teams from UC Davis, Santa Cruz, Merced and San Francisco.

But despite enthusiasm for their product, Das and Brown began to realize Ag for Hire wasn’t a good fit for them. Das said that they ran into issues with regulations and workers’ insurance. More importantly, though, they weren’t interested in building an employment recruiting firm. “We realized that working on Ag for Hire was not a good idea because that’s not what we do. What we specialize in is technology,” said Das. “So, we pivoted. We went from a recruitment service to a recruitment tool.” 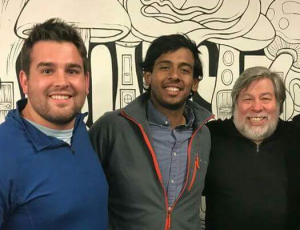 A Vetting Tool for the Gig Economy

The tool they are trying to create acknowledges some fundamental truths about people, and young people in particular: No one likes to fill out dull and sometimes confusing online forms. For a generation that came of age attached to a smartphone, being able to apply for a job by having a chat on their phone is fundamentally more appealing and intuitive.

The purpose of the chat is to gather basic information, vet the candidate to find out if they have the skills they need for a particular job and maybe help them find another job if their skillset is broad enough.

Das thinks that as the gig economy grows, vetting will be huge. He points out that a major advantage of gig economy services like Lyft and Uber is that there is already a major infrastructure in place for vetting potential drivers. “There’s a thing called a driver’s license. The states do the vetting for them,” said Das. 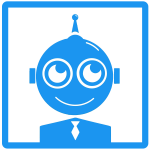 But for other industries, no comparable vetting infrastructure is in place. “We want Wazlo to be the vetting platform for the on-demand gig economy,” said Das.

And now they are testing out their product along the Sunshine Coast of Queensland, Australia.

In December 2016, Das and Brown were notified they had been awarded a $100,000 AUD grant (about $75,000 in U.S. dollars) from Hot DesQ, a program from the Queensland state government to attract early stage entrepreneurs and startups to Australia. The very next month, in January, they took a leave from their classes and made the long flight to the land down under.

The grant has allowed them to focus on developing Wazlo. They are in “private beta mode,” working closely with several Australian companies and agencies to refine the product and train the artificial intelligence.

Das said one contract they received in Australia was for finding strawberry pickers. “We increased the efficiency of recruiters, automating up to 60 to 70 percent of their work,” said Das. They also used Wazlo to try to find workers for cafes and restaurants. When he presented Wazlo to a class of college students in Australia, Das said they received 10 applications in six minutes. “They realized instead of going to a boring form they could actually get a Facebook message. It was exciting for them.”

Das was only able to stay in Australia for three months—he’s back for spring quarter at UC Davis, but Brown is taking a longer leave and is still at the Innovation Centre Sunshine Coast in Queensland.

They are hoping to release Wazlo in about six months. “I think the conversational interface will be the future of applications. It’s like a new paradigm,” said Das.

Read More
← Invasion of the Poultry Manure Microbes. Or Maybe Not. Researchers launch underwater robots to study how and when ice shelves collapse →