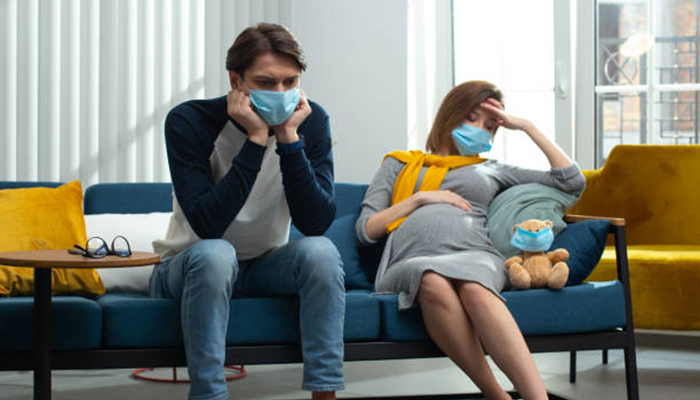 In March 2020, when California imposed a shutdown to curb the spread of COVID-19 outbreak, many pregnant people experienced pandemic-related fear and anxiety.

They worried about availability of equipment and resources, having access to healthcare teams, in-hospital delivery conditions and contracting the virus itself. They were also rethinking whether they should consider giving birth outside the hospital setting.

Around the same time the pandemic started, Leigh Ann Simmons, co-director of the UC Davis Perinatal Origins of Disparities (POD) Center, a research unit under the Office of Research, and her team began a study to examine the challenges pregnant people were facing across California.

In this new study, Mackenzie Whipps, postdoctoral researcher with Simmons and lead author, captured several trends for subgroups of people in California who are at increased risk from COVID-19 complications during pregnancy.

As pregnant and postpartum people are particularly vulnerable to illness, mortality, and morbidity from COVID-19 infection, this study is important in the current circumstances.

In addition to higher risk from COVID-19, pregnant people can also experience poor health outcomes due to lack of access to adequate routine care. With healthcare touchpoints disrupted to varying degrees across California, concerns ranged from visits to the clinic and scheduling tests, to meeting with midwives and getting admitted into a facility.

“We know that delaying or missing these touchpoints can have really serious downstream consequences for pregnant people and for their children,” said Whipps.

According to Whipps, another sizable group that was possibly hit the most during the early months of the pandemic was the daily wage workers who lost their jobs for various reasons. Whipps counted this population among the higher-risk groups because of economic instability and limited access to regular care.

Whipps said that the research team was interested in learning whether COVID-19 was creating the same strains for everyone, including racial and ethnic minorities, or whether certain groups were being disproportionately affected. The rationale behind this hypothesis is that, since historically minoritized groups could already be dealing with financial duress, they might have a lower level of healthcare access to begin with.

The team launched a survey targeting pregnant people between the ages of 18 and 44 to find out how these factors influenced their pregnancy plans and decision making.

The research specifically looked at two distinct points in the pandemic: a summer “non-surge” wave and a winter “surge” wave to understand how healthcare access, concerns and decision-making regarding childbirth changed over time.

Whipps and colleagues were surprised by the findings. They found that in California, despite notable spikes in the number of COVID-19 cases and hospitalizations, pregnant people had fewer concerns and enjoyed more access to healthcare during the winter “surge” of 2020-2021 than those during the “non-surge” point in the pandemic.

On the other hand, marginalized minority groups such as Black and Indigenous pregnant people did not fare well, nor did those experiencing acute financial difficulty. Findings suggest that poorer birth outcomes were seen in these groups as they face significantly higher economic and healthcare-related stress, which were exacerbated by the pandemic.

But this difference was not easily visible when the researchers compared white groups with the historically underrepresented minority groups as a whole. It is when they dived deeper, disaggregating by racial group, a much more complex picture emerged. “We found, for instance, that Black and Indigenous participants specifically were more likely to be concerned about their birth plans in the pandemic than those who were white multi-racial, Asian, or Pacific Islander,” said Whipps.

This way of disaggregating data by particularly vulnerable subgroups has been an effective strategy to understand populations and their pregnancy concerns.

With the pandemic entering its third year, Whipps said, “we need to keep an eye out for these unique populations that are still at risk, and I think that vaccine and mitigation measures need to take pregnant people’s concerns and fears into account from the very beginning, not as an afterthought.”

Simmons said that the pandemic is far from over, and supporting all pregnant people, but especially those in historically minoritized groups, to get the care they need, including vaccination should be the goal. “Providers should be making concerted outreach efforts to these groups to build trust and encourage consistent, evidence-based prenatal care,” Simmons concluded.