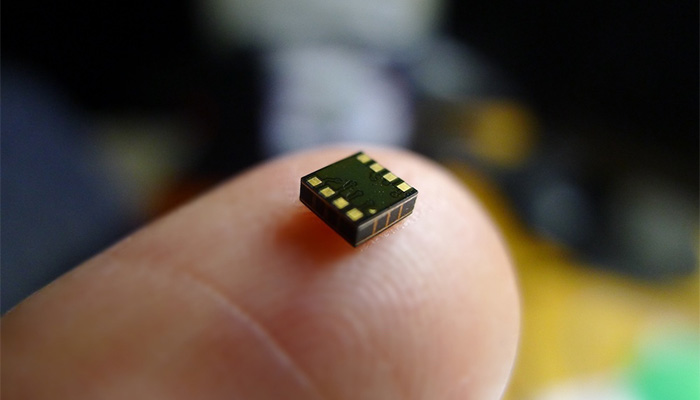 Chirp Microsystems, a startup enabled with technology developed at UC Davis and UC Berkeley, announced it has been acquired by Japanese electronics giant TDK Corporation.

Based in Berkeley, Chirp Microsystems makes tiny, ultra-low power sensors that function like sonar or echolocation, sending out ultrasonic sound waves and then measuring how long it takes for the returning echo to come back. The micro-electromechanical systems (MEMS) technology enables extremely precise sensing, ranging from several centimeters to several meters.

Chirp’s sensor technology can be used in drones, robots, vehicles, smart home products, augmented reality and virtual reality systems, and many other applications. Because the transducers are just a few millimeters across, they use very little power compared to a conventional ultrasound transducer.

David Horsley, a professor in the UC Davis Department of Mechanical and Aerospace Engineering, is a co-founder of Chirp and the chief technology officer.

“Professor Horsley is an exemplar of the type of faculty entrepreneur who is driving societal impact through innovation in the collaborative environment that the University of California fosters, and that the UC Davis College of Engineering enables,” said Dushyant Pathak, associate vice chancellor of research and executive director of Venture Catalyst. “The novel sensor system that he invented and that was developed by Chirp Microsystems, where he was co-founder and chief technology officer, is an example of the cutting-edge technology and engineering innovation being driven by our faculty.”

David Horsley, co-founder of Chirp Microsystems and a professor of electrical and computer engineering at the University of California, Davis, explains the technology behind Chirp’s sensors at CES 2016. (Credit: National Science Foundation)

Horsley and his graduate students developed the sensor technology collaboratively with Bernhard Boser, a professor in the UC Berkeley Department of Electrical Engineering and Computer Sciences. Much of the work was done at the Berkeley Sensor and Actuator Center, which conducts industry-relevant, interdisciplinary research on micro- and nano-scale sensors.

“UC research projects like ours fill an important role of conducting fundamental research that can have commercial impact,” Horsley said. “After the fundamental work was done, we founded Chirp based on a vision of tiny ultrasonic sensors in everyday devices, from smart-phones to robots. As part of TDK, Chirp will have the resources and global scale to make this vision a reality.”

Chirp will become a fourth business unit, Ultrasonic Tracking and RangeFinding, within InvenSense, a TDK Group company headquartered in San Jose. InvenSense is a world leading provider of MEMS sensor platforms. Chirp will remain based in Berkeley.

About UC Davis
UC Davis is a global community of individuals united to better humanity and our natural world while seeking solutions to some of our most pressing challenges. Located near the California state capital, UC Davis has more than 35,000 students, an annual research budget of over $780 million and a comprehensive health system. The university offers 102 undergraduate majors and 99 graduate programs through four colleges and six professional schools.

About Venture Catalyst
Venture Catalyst is one of three units within the Technology Management & Corporate Relations division of the UC Davis Office of Research. Venture Catalyst furthers the university’s educational, research and public mission by supporting UC Davis students, faculty and researchers in translating science, engineering and innovative research, through well-resourced startups, into societal impact.