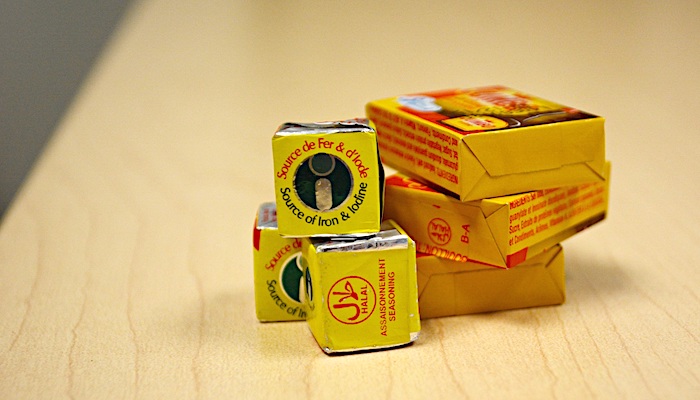 A major new UC Davis study in Ghana will look at the health impact of adding six micronutrients to bouillon. (Photo: Reina Engle-Stone)

Bouillon is a staple ingredient in West African cuisine. The cubes are used to flavor soups, stews, gravies and rice. Popular dishes include Red-Red, a bean stew made with red palm oil and fried ripe red plantain, and Jollof Rice, a spicy rice dish prepared with tomatoes, peppers and onions.

Adu-Afarwuah is a UC Davis alumnus. He received a Ph.D. in nutrition and is now a senior lecturer in the Department of Nutrition and Food Science at the University of Ghana, Legon.

“To start preparing the soup, the meat or fish goes in first, then the onion, the bouillon and then tomatoes and peanut paste or palm fruit pulp are added,” said Adu-Afarwuah. “A lot of the meals that are prepared use bouillon.”

The popularity of bouillon in West African cooking is at the heart of a major new UC Davis clinical trial that Adu-Afarwuah is conducting with Reina Engle-Stone, an assistant professor in the UC Davis Department of Nutrition.

The study will assess the potential health benefits of fortifying the flavored cubes with micronutrients. Although it is being conducted in Ghana, it will help shape policies and regulations for bouillon production in other West African countries, including Burkina Faso, Nigeria and Senegal. Although some manufacturers voluntarily fortify bouillon with vitamins and minerals, this is the first large-scale assessment of the benefits. 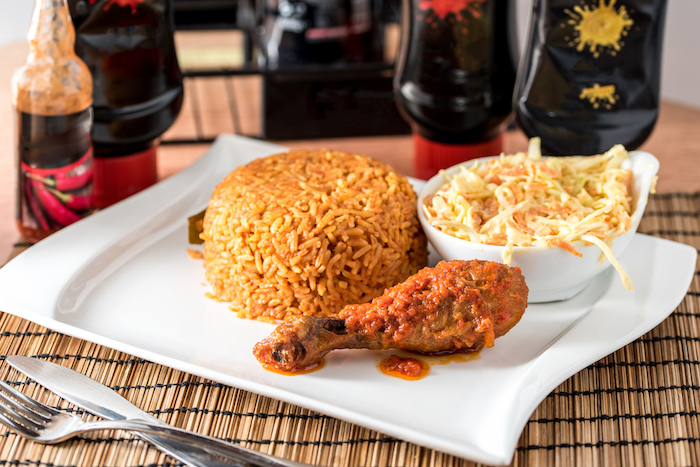 Reina Engle-Stone, the principal investigator, received a $4.1 million-dollar award from Helen Keller International to conduct the clinical trial in Ghana. The grant will also fund research looking at the cost-effectiveness of fortified bouillon in the context of existing micronutrient programs in Burkina Faso, Senegal and Nigeria.

The research in Ghana is part of a global initiative on bouillon supported by the Bill & Melinda Gates Foundation. It includes scientists at the Research Institutes of Sweden (RISE) and the Commonwealth Scientific and Industrial Research Organisation (CSIRO) of Australia, as well as a consortium of industry representatives.

With support from the Gates Foundation, Helen Keller International is pulling together multiple institutions, governments and non-governmental organizations in West Africa to help set safety and manufacturing standards for bouillon and guidance for its micronutrient fortification. 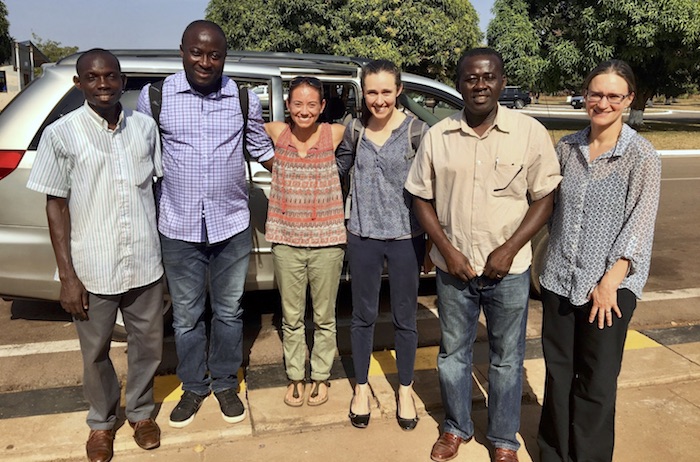 A pause for the pandemic

The grant was awarded in spring 2020, right around the time COVID-19 infections were spreading across the globe, so the launch of the initial fieldwork was put on hold.

In July, cases in Ghana reached a daily high of about 1,100, but since then, the daily infection rate has dropped significantly. Following approvals from the ethics review boards of UC Davis and Ghana Health Service, the clinical trial’s first phase is now going forward.

Researchers have integrated COVID-19 prevention into the trial protocols and are following guidance from the World Health Organization and Ghana Health Service. This includes symptom and exposure screening, social distancing, working outdoors to the extent possible, wearing masks and hand washing.

At the beginning of October, Adu-Afarwuah and Sika Kumordzie, a UC Davis postdoctoral scholar, launched training for the 14 field staff working on the pilot phase in the Tolon and Kumbungu districts in northern Ghana. Previous studies have shown people in northern Ghana are more likely to be deficient in key micronutrients than those in the rest of the country.

“We would like to conduct the clinical trial in areas where people are likely to benefit from the additional micronutrients,” said Adu-Afarwuah.

Most people in the United States take food fortification for granted. Adding nutrients to food dates back almost a century to 1924, when iodine was first added to salt. A lack of iodine was, and still is, one of the most common causes of goiter, an enlargement of the thyroid gland. By adding iodine to common salt, the deficiency was nearly eliminated as a public health problem in the U.S.

After that, beginning in the 1930s, vitamins were added to food to prevent diseases that are now rarely heard of in the United States. The addition of vitamin D to cow’s milk prevents rickets. The addition of Vitamin B-3 (niacin) to flour prevents pellagra. 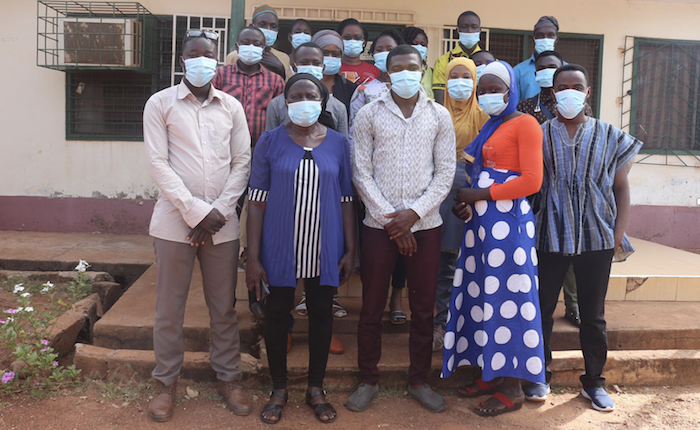 Engle-Stone has been studying food fortification for more than a decade. In 2009, she was part of a team that collected data to help Cameroon develop its fortification program for wheat flour and cooking oil. Even then, she was eyeing bouillon as a possible vehicle for micronutrients.

“Oil and flour are staple foods, but in many parts of West Africa, almost every sauce uses bouillon,” said Engle-Stone. “We know that per capita consumption for adults is around two to three grams per day. In some countries, 90 percent of people report they consumed bouillon the previous day. So if you want a food vehicle that’s going to reach your entire population, this is it.”

The study will look at the health impact of adding six micronutrients to bouillon: iodine, iron, zinc, vitamin A, folic acid and vitamin B-12. Each of these micronutrients is known to have health benefits, but fine-tuning the precise amount is complex.

Engle-Stone explained. “We look at how this trial fits into existing micronutrient strategies. If nutrients are already added to wheat, maize and sugar, how do we make sure people have enough but not too much?”

Stephen A. Vosti, an adjunct professor in the UC Davis Department of Agricultural and Resource Economics, is also part of the research team. He is working with nutritionists and others to identify the most cost-effective strategies for addressing micronutrient deficiencies. The problem is challenging because diets and micronutrient deficiencies vary by geographic regions and socioeconomic status.

Vosti is also studying how a new fortified bouillon will reach homes. “All bouillon products reach households via markets. It is important for us to know what these supply chains look like and how they might be affected by regulations requiring bouillon cubes to be fortified,” said Vosti. 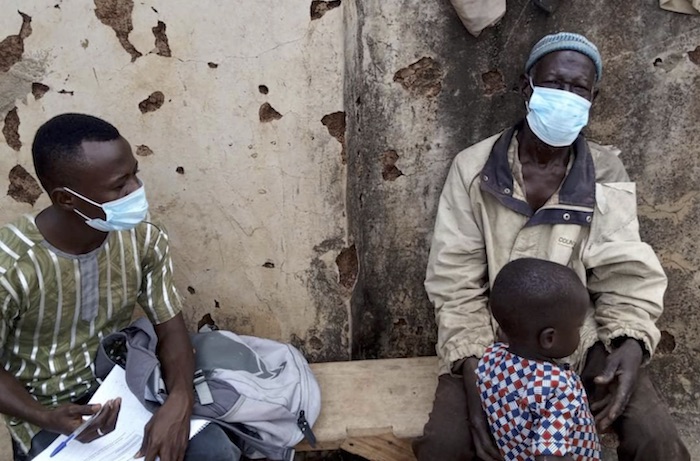 The logistics are significant. Half the bouillon will be produced with the six micronutrients (fortified bouillon) and half with only iodine (standard bouillon). All of the cubes must be labeled and coded correctly. The bouillon will be manufactured in Spain, and once it arrives in Ghana, hundreds of pounds of it will need to be securely stored for months. Teams will go out on motorcycles every two weeks to deliver the bouillon to the participants’ homes. To keep track of participants and eliminate errors, they will be using bar code scanners to confirm bouillon delivery  to the correct household.

Approximately 1,650 participants will be regularly provided with either standard bouillon cubes or fortified cubes to use in their meals. Neither the participants nor the field staff will know who has received fortified or unfortified bouillon. Over the nine-month study, they will receive enough bouillon to cook for their entire household.

“Although the study will be nine months for each person, the whole thing takes at least two years to complete,” said Engle-Stone. “The field logistics alone are very challenging, and then there’s a lot of lab work, as well. There’s transportation for the bouillon and the biological samples.”

The study will use blood draws and breast milk to measure the participants’ nutrient status before and after the clinical trial. This will allow the researchers to compare the nutrient status of those who received the fortified bouillon and those who did not.

“For some of the nutrients, it takes a while for stores to build up,” explained Engle-Stone. “Iron, zinc and vitamin A are nutrients we think will take longer to detect an increase in their stores. It also provides a better approximation of what people are consuming over years and years. At the end of the study, we want to see if micronutrient status and related measures improved. For example, did we reduce the prevalence of anemia?”

Researchers in California and Ghana are meeting via Zoom to coordinate the clinical trial. (Photo: Reina Engle-Stone)

The pandemic has changed how the study is being organized. UC Davis researchers who would typically be in Ghana for the launch and during data collection are now coordinating Zoom meetings with an 8-hour time difference and sometimes unreliable internet connections.

“What could be done together in a week in-person is challenging to do from thousands of miles away,” said Engle-Stone. “One reason we can still launch the project successfully during the pandemic is that the team is going into the project with a lot of trust. Seth is a UC Davis alumnus, and researchers at the Institute for Global Nutrition have collaborated with him and the University of Ghana on other studies.”

Despite the obstacles, she and the other researchers remain very excited about the project and the broader fortification initiative.

“Fortified bouillon will allow us to deliver key vitamins and minerals to vulnerable individuals even in the remotest of places in Ghana and elsewhere,” said Adu-Afarwuah.

If the clinical trial shows success, UC Davis will work with policy engagement specialists who, together with Helen Keller International, will help translate the findings to governments and international non-governmental organizations (NGOs) to facilitate national and regional policy changes and funding to cover the costs.

“We do not want another ‘miracle on the shelf,’” said Vosti. “A product that can benefit millions of people that goes unused because we failed to pave the way for the required investments and policy changes.”

For Engle-Stone, the study marks the fruition of an idea she and her team have had for years.

“We’ve been thinking about it for so long,” said Engle-Stone. “Fortifying this one condiment won’t solve everything, but we are excited about the possibilities for addressing a few of the common forms of malnutrition by boosting the nutritional value of foods that people already eat.”

Institutional review boards will review this study’s research protocols at UC Davis and Ghana before beginning this research. Research from the study will be registered online at clinicaltrials.gov.