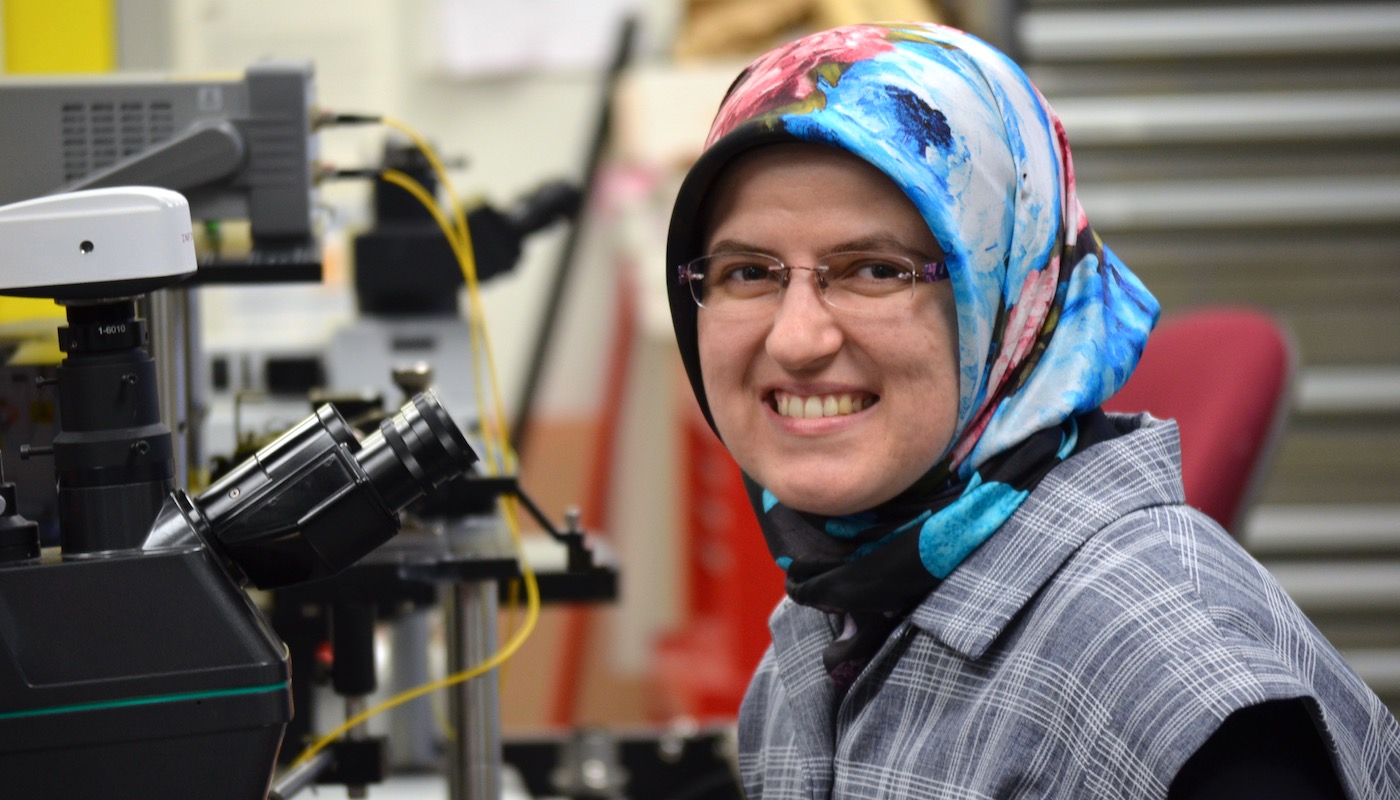 A love of physics lead Hilal Cansizoglu, a postdoctoral research fellow in the UC Davis Department of Electrical and Computer Engineering, from Turkey to the United States. Her work adding nanostructures to silicon could be a game-changer for data centers.

The very first flight Hilal Cansizoglu ever took was when she left Turkey in 2008 to pursue a master’s degree in electrical engineering in the United States.

Her family was at Istanbul Atatürk Airport to see her off, and one of her younger sisters — she has two — later told Hilal she expected her to turn around. That she thought Hilal would come back home with them.

But after Hilal went through security, she just waved to her parents and sisters and continued on to the gate, where she would board an 11-hour flight to New York and then spend another four hours flying to Dallas, Texas.

It never occurred to her to turn around. “I definitely didn’t know what to expect, but America is a dream country for us. I was very excited to go,” Hilal said.

Hilal Cansizoglu (her first name is pronounced hee-loll and her last name is pronounced john-sū-zō-lū) is a post-doctoral fellow in M. Saif Islam’s lab in the UC Davis Department of Electrical and Computer Engineering. Since she arrived at UC Davis in 2015, she’s been part of a team that has been working to put nanostructures — specifically holes — into silicon in order to get it to absorb more light, which allows for high-speed data connections.

Hilal explained that she is not the inventor of the technology. “When I was doing my Ph.D., I was working on some light-trapping structures, so it helped me to engage with the project very quickly.” The project is a collaboration with the Silicon Valley startup, W&WSens Devices Inc.

One of the primarily applications Hilal and other researchers see for this new technology is in data centers. Silicon photodiodes may be able to make this transfer of data much less expensive.

“Silicon photodiodes are really an ancient story,” Hilal said. Photodiodes — semiconductor devices that convert light into an electrical current — are used in a wide variety of electronic applications. “They have been used for a long time, but there is no ultra-fast silicon photodiode on the market. Silicon is not a good absorber of light.”

That extra absorption means the silicon photodiode can suddenly be fast — really, really fast. “We are reporting 30 picoseconds,” Hilal said. “A picosecond is 10−12 or one trillionth of a second. So, it’s a very small amount of time. Compared to silicon photodiodes currently on the market, these are 20 to 25 times faster.”

Making an ultrafast silicon photodiode is a fairly radical breakthrough. Hilal and her fellow research partner, Yang Gao, were the lead authors of a paper published last year in the prestigious journal, Nature Photonics, that outlined their results.

One of the primarily applications she and other researchers see for this new technology is in data centers. “Everything that you are downloading to your phone — videos, emails, texts — is data that needs to be transferred from the data center,” Hilal said. “There are lots of processes, lots of transfers, but since it is an incredibly short amount of time, we never sense that the data is going through a path.”

Growing up near the ancient city of Troy

Hilal remembers always being interested in science and especially electronics. “When I was a kid I was usually trying to fix something,” she said.

She grew up in Çanakkale on the west coast of Turkey. It’s a popular tourist city on the southern coast of the Dardanelles, a narrow strait that marks the continental boundary between Europe and Asia. Southwest of the city is one of the most famous archeological sites in the world, the ancient city of Troy. “In the summer, we would have lots of tourists from all over the world,” Hilal said.

Her father worked at the public library in Çanakkale, in the children’s section. Hilal started going there regularly when she was about five. “It was heaven for me. I couldn’t read at that time. I just liked the books.” When she got older she’d go to the library after school to do her homework. “At that time, there was no internet so I would use the encyclopedia,” she said.

She describes her parents as protective, but also encouraging when it came to Hilal and her sisters getting a good education. Hilal explained that her parents’ generation, especially her mother, hadn’t had the same opportunities as she and her sisters, and they wanted the best for their daughters.

Even when she was young, Hilal had drive and curiosity. At fifteen, she went to boarding school for high school and immersed herself in physics. When she was in ninth grade, she competed in the prestigious and highly competitive Physics Olympiads. She was one of only three girls (the other 52 competitors were boys), who passed the first step and earned her way to a special summer camp at Middle East Technical University (METU), the leading public university in Turkey.

During the two-week camp, the students received college-level physics lectures from METU professors and participated in experimental research.

“It was an extraordinary opportunity for a high-school kid,” Hilal said. “It changed my life. That’s when I realized, ‘Okay, this will be my major.’”

After high school, she went on to attended METU, which has English as the official language. “That first year was a little bit hard for me,” she said. “I wanted to jump into the sciences but I had to take English classes first.” She received her combined B.S./M.S. in physics education from METU in 2007.

Hilal was the first in her family to go to college, but not the last. Her two sisters followed her lead — one received a B.S. and an M.S. in math education and the other received a B.S. in international relations. 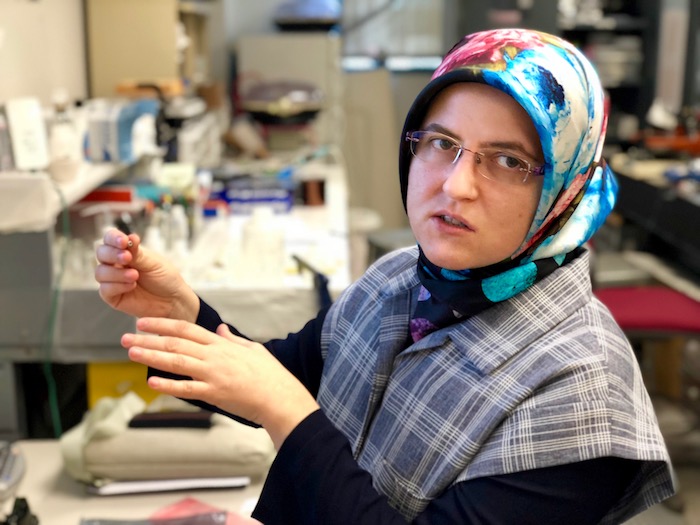 From Turkey to Texas

After receiving her degrees from METU, she applied and was accepted to Southern Methodist University (SMU) in Dallas. When Hilal arrived in 2008 after her long flight from Turkey, the city wasn’t at all what she expected. She thought it would be mostly a desert and was surprised by the sprawling metropolis and the downtown high-rises.

Many of the challenges she faced weren’t academic. She had never driven, didn’t have a car. At first, she got rides from her new friends and used public transportation when it was available. But she needed to learn to drive, and after a year she got her Texas driver’s license. She was able to borrow cars from friends and eventually bought a used 1993 Toyota Corolla that, until she got it fixed, needed a regular infusion of power steering fluid. “I learned quite a bit about mechanics with that car,” Hilal said.

She met her husband, Mehmet Fatih Cansizoglu, when she was at SMU. “So that’s when my plans changed a little bit.”
She had been planning to stay at SMU for her Ph.D. but Mehmet was pursuing a Ph.D. in applied science at the University of Arkansas (UA) Little Rock.

By chance, Hilal already knew Mehmet’s advisor at UA Little Rock, Tansel Karabacak, an associate professor in the Applied Sciences Graduate Program. Before starting the program at SMU, Hilal had been in touch with Karabacak, who was interested in recruiting her for work on nanostructures at UA Little Rock. But at that time, he didn’t have funding for a position for her.
“When we decided to get married, Dr. Tansel had a grant where he could hire a research assistant. We got lucky. I was one of the best picks!” she said.

Hilal went on to receive her Ph.D. in Engineering Physics/Applied Physics in 2014 from UA Little Rock. She stayed on for several months as a postdoc but then got the offer in M. Saif Islam’s lab at UC Davis. She moved to Davis during the summer of 2015 and took up the challenge of figuring out how to put holes into silicon.

But as can be common with academic couples, landing at the same institution, or even in the same city or region, can be a challenge. Mehmet is now in Dallas, Texas.

“He got an offer as a post doc at Southwestern Medical School,” Hilal said. “He made a transition to biophysics. He’s building instruments for bacterial detection. It’s very interesting, very exciting work,” she said.

Dallas is about a three-and-a-half-hour flight from Sacramento. Although she didn’t take her first flight until she was on her way to the United States, air travel is now a regular part of her life.