Irwin Donis-González, a cooperative extension specialist in Department of Biological and Agricultural Engineering, is passionate about improving postharvest engineering.

Irwin Donis-González met his wife when he was putting chestnuts through a CT scanner in the Department of Veterinary Science at Michigan State University, a machine more commonly used to look at the insides of domestic pets like dogs or cats.

When they met, Kristine was a veterinary student and Donis-González was a doctoral student studying different methods to assess agricultural produce decay.

“She looked at the tray and said, “What are you doing?’” said Donis-González. “That’s how we met.” 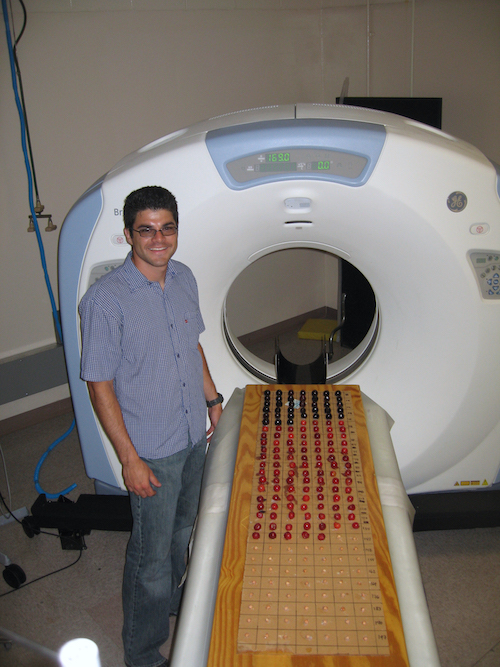 For Donis-González, that precise moment when he first saw the clearly rendered images of chestnuts from the CT scanner was when he fell in love with agricultural engineering.

A native of Guatamala, Donis-González was at Michigan State University on a Fulbright Scholarship and was studying chestnuts — Michigan is the biggest producer of chestnuts in the U.S.— with Daniel Guyer, a professor of biosystems and agricultural engineering, and Dennis Fulbright, a professor of plant pathology.

The chestnut research group was looking at noninvasive ways to detect internal decay in fruit (chestnuts are actually a fruit) and began collaborating with Anthony Pease, a radiologist who supported the interdisciplinary — and perhaps somewhat unorthodox — use of veterinary school equipment for chestnut research.

For Donis-González, that precise moment when he first saw the clearly rendered images of chestnuts from the CT scanner was when he fell in love with agricultural engineering. “It’s a really incredibly feeling, when you see your idea and realize it’s working,” he said.

Although CT scanners are currently too expensive for most commercial fruit growers to use, that may change, and the research at Michigan State University showed that the machines could, in fact, very quickly and efficiently scan and sort fruit. The work was about testing the big idea, and the big idea worked.

“In academia, we get to work at a different level, we get to take risks,” he said. “That’s why people here have such a passion for what they do,” he said, referring to his current job as an assistant postharvest systems engineering specialist in Cooperative Extension, in the Department of Biological and Agricultural Engineering at UC Davis.

He joined the UC Davis faculty in 2015. His wife, Kristine Donis-Cox, also works works at UC Davis, as a postdoctoral fellow at the California National Primate Research Center.

“My colleagues could easily go work in the industry for many times more than they earn here, but at UC Davis we get to consider and develop the next big idea.” He laughs. “It’s almost like an addiction.”

Donis-González is a thoughtful listener, waiting a beat or two after each question before answering. He is also quick to smile. A framed burlap coffee sack from Guatamala hangs on the wall in his office in Bainer Hall, a souvenir from when he used to certify coffee. He uses the word “passionate” to describe the professors and mentors he worked with at Del Valle University of Guatemala and later at Michigan State University as well as his colleagues and the people he works with through his outreach efforts.

“My parents always put a high importance on education,” said Donis-González. He grew up in Mixco, a suburb on the outskirts of Guatemala City. He says he and his brother and sister were raised in a humble home. His parents also encouraged him to do things with his hands. “I’ve liked to build stuff since I was a kid.”

Growing up, he spent time working on the farm his father had inherited near San José Pinula. It was in the mountains at high elevation — about 6,000 feet above sea level. Although some berries and avocados were commercially grown, there were also a lot of pine trees for wood production. There was no electricity at the farm, so for light they would use pressurized kerosene lamps, the kind you pump. It was at the farm that Donis-González learned agricultural skills and also how to improvise. 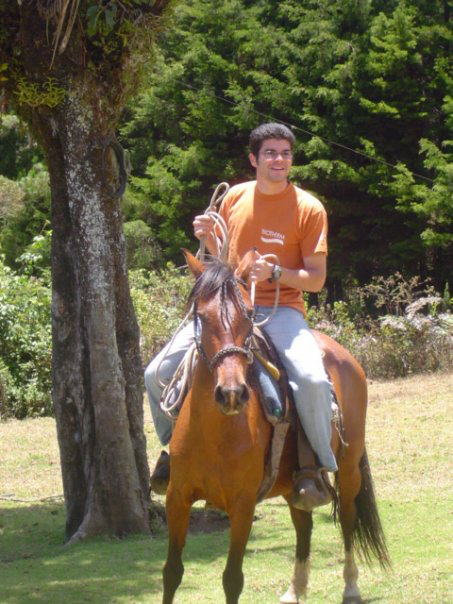 Growing up, Donis-Gonzalez spent time working on the farm his father had inherited near San José Pinula, Guatemala.

“We did everything. We built our own silos with our own hands. And because there was no power, we would have to drill by hand. Hand drills are pretty neat,” he smiled. “They don’t use them anymore.”

“One of the most valuable experiences for me was to work with all sorts of people, small-scale coffee farmers to farmers who owned hundreds and hundreds of acres. I was in contact with lots of people, people with different levels of education, monetary wealth — everything. I learned from everybody.” He credits that experience with helping him with his current extension work.

After working as a certifier for a couple years, he applied to the Fulbright Program and was accepted to Michigan State University, one of the original land-grant colleges. He received an M.S. in plant pathology in 2008 and a Ph.D. in biosystems and agricultural engineering in 2013. He spent another two years at MSU as a postdoctoral research fellow before joining UC Davis in October 2015.

Postharvest engineering, his specialty, essentially encompasses what happens to the crop after it has been harvested — everything from sorting, cleaning, handing, packing, storing and transportation.

“As a postharvest engineer, we focus on three different topics. One is refrigeration, one is noninvasive assessment, three is drying. That’s what we pretty much do as postharvest engineers.” His work is incredibly varied, from outreach with farmers to working on specific engineering projects.

He works with various boards in California — the Walnut Board, the Cherry Board, the Almond Board, the Pistachio Board. Those, he says, are usually smaller projects focused on solving a specific problem. For example, he is working on optimizing how walnuts are dried. Another project is comparing two different systems that are used in the field for quality and maturity assessment.

One of the most innovative project he’s working on now is developing a completely new type of postharvest dryer. “Instead of using heated air, it uses hydroscopic material, drying beads, to dry the air and then dry the commodities,” he said.

Donis-González’s outreach work with farmers since arriving at UC Davis has taken him all over California, what he describes as “beautiful, gorgeous places.” He notes that “when you are from outside the United States, you think California is Hollywood, that it all looks like Los Angeles. But California is not just Los Angeles.” He notes that working in agriculture is not easy. The work is hard and the margins are small. He wants to make the work easier. 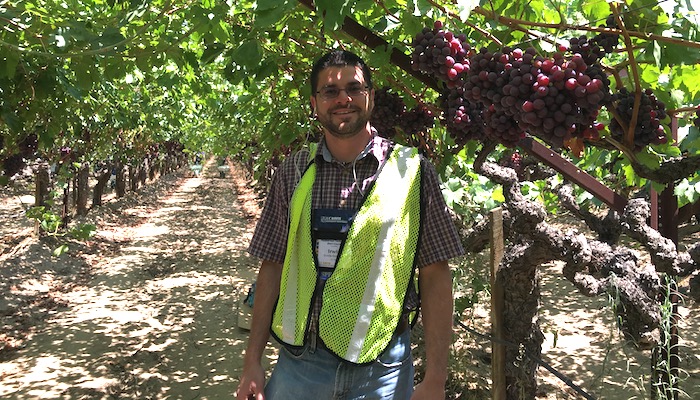 Donis-González’s outreach work with farmers since arriving at UC Davis has taken him all over California.

“At the end of the day, we all have to eat.” He sees food as what brings people together, what unites different cultures and makes his job meaningful. “Everything we do in this department, everything I do in my program, is falling into people’s hands. Either the producer, the processor or the consumer. We’re everywhere. For me, my passion is basically to try to offer the best of the best and share whatever we know so that we can better the life of people in California and in the world.”