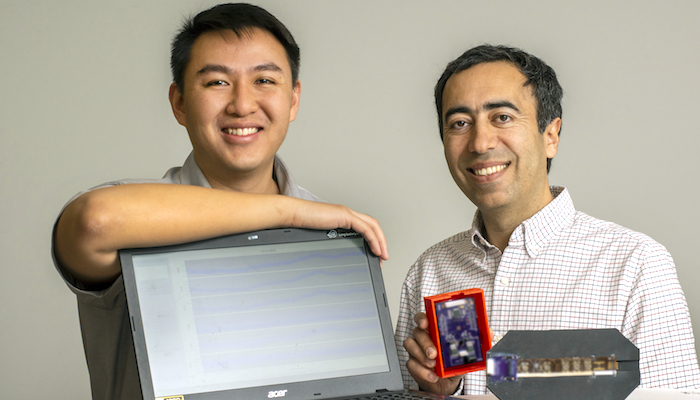 Daniel Fong (left) an electrical and computer engineering Ph.D. student, and Soheil Ghiasi (right), a professor of electrical and computer engineering, are photographed in Ghiasi's lab in Kemper Hall, February 2020. Ghiasi and Fong have invented a patented device that can measure blood oxygen saturation in a fetus through the maternal abdomen. (Karin Higgins/UC Davis Photo)

Soheil Ghiasi, a professor in the UC Davis Department of Electrical and Computer Engineering, has launched a startup, Storx Technologies, to commercialize a noninvasive pulse oximeter that can measure a baby’s blood oxygen saturation while it is still in the womb. His innovation may lead to safer deliveries and enable new fetal research.

Since he joined the UC Davis faculty in 2004, Ghiasi’s main focus has been application-specific embedded computers.

“These are computers that don’t look like computers,” said Ghiasi. “They are pretty much everywhere. Some are in low-end devices like toys or coffeemakers. But some have high-end, mission-critical requirements, and are integrated into military applications, airplanes or medical devices.”

He became interested in fetal monitoring technology after his daughter was born. During her delivery, the readings on the fetal monitors, which measure heart rate and uterine contractions, fell into a gray zone, indicating possible low oxygen levels. Inadequate oxygen supply to the fetus can result in hypoxic brain injury, and can lead to disabilities or death.

“Some patterns are obviously alarming so doctors do an emergency C-section,” said Ghiasi. “And some patterns show there isn’t a problem. But there’s a gray area in the middle, which is referred to as ‘non-reassuring’ fetal heart rate traces. ”

Because of his daughter’s non-reassuring heart rate, she was delivered via C-section. Both mother and daughter were fine, but the major abdominal surgery meant a long recovery for his wife.

Afterwards, Ghiasi learned that non-reassuring fetal heart traces are not uncommon during delivery.  He also learned that in the United States, C-sections account for almost a third of all births — a rate higher than most developed countries — without resulting in better health outcomes for mothers and babies.

“I was new to this. I did some research and connected with colleagues at UC Davis Health who work on the obstetric side as well as those working with animal models. There’s a large body of research about fetal oxygen levels,” said Ghiasi.

With current fetal monitors, the health of a baby is inferred from her heartrate and mother’s uterine contractions, but the baby’s exact level of oxygen is not known. Ghiasi began to think about a non-invasive way to determine the fetal blood oxygen levels in utero, rather than solely relying on cardiac patterns, to know when a fetus was truly in distress and in need of delivery by C-section.

He pictured something similar to a pulse oximeter, the inexpensive devices that are widely used in healthcare and can be clipped onto a finger, earlobe, or even toe to measure blood oxygen saturation.

“When blood is not oxygenated it looks darker, and when it’s oxygenated it looks redder. The pulse oximeter shines light and registers how much of the light is absorbed. Then, it performs some color analysis to compute the fraction of red blood cells that carry oxygen,” explained Ghiasi.

In fall 2018, Ghiasi received a $1.2 million grant from the National Science Foundation to work on improving fetal monitoring.

Along with Daniel D. Fong, a Ph.D. student in his lab, Ghiasi designed a noninvasive transabdominal fetal oximeter that transmits near-infrared light through the mother’s abdomen.

The small amount of tissue-diffused light is sensed on the maternal abdomen; the measurements are subsequently analyzed to remove the contributions of mother’s tissue layers and to infer measurements that are strictly due to the fetal tissue. Such measurements are then utilized, similar to conventional pulse oximeters, to compute the baby’s blood oxygen saturation.

Ghiasi worked with InnovationAccess to file a Record of Invention for the technology and, in July 2018, the University of California filed a patent application for his and Fong’s invention.

They collaborated with Diana L. Farmer, a renowned fetal and neonatal surgeon at UC Davis, to successfully test and validate the trans-abdominal fetal oximeter on pregnant ewes.

“Through collaboration with all of these colleagues we were able to successfully test our innovation in animal models,” said Ghiasi

Results from their research were presented at the Society for Maternal-Fetal Medicine pregnancy meetingin February, and were recently published in IEEE Transactions in Biomedical Engineering.

Next up is testing the novel fetal monitoring system with humans.

“We have approval to test patients who are at least 36 weeks pregnant and are coming in for routine checks. If that goes well, the next phase will be to test this during labor. That would be the ultimate application,” said Ghiasi.