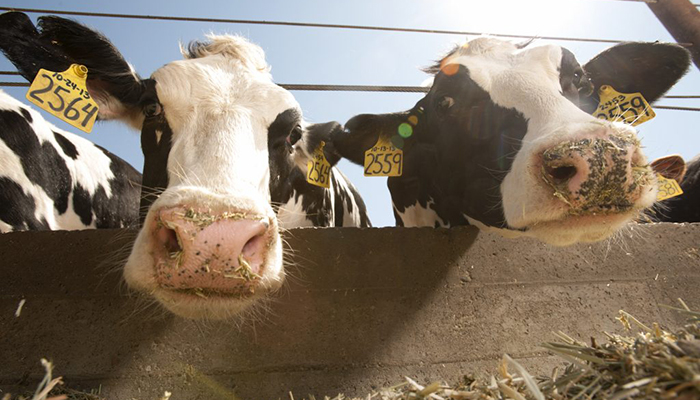 Chromosomes from a legendary bull born in 1962 account for almost 14 percent of the genome in the current Holstein population in the United States. A genetic mutation traced back to that bull, Pawnee Farm Arlinda Chief, is thought to be responsible for an estimated 500,000 spontaneous abortions in Holstein cattle worldwide. (Gregory Urquiaga/UC Davis)

Pawnee Farm Arlinda Chief was one of the most prolific bulls in the history of Holstein cattle breeding — but he also introduced a lethal gene into the population, responsible for an estimated half million spontaneous abortions worldwide. Now researchers have identified the mutation responsible, enabling ranchers to test for and avoid it.

Born in 1962, Chief produced 16,000 daughters, 500,000 granddaughters, and more than 2 million great-granddaughters. His sons were also popular sires. As a result, Chief’s chromosomes account for almost 14 percent of the genome in the current Holstein population in the United States.

“Our discovery of a mutation that is responsible for reduced fertility is a major step toward eliminating this harmful allele from the Holstein dairy population,” said Harris Lewin, senior author of the study and a professor in the UC Davis Department of Evolution and Ecology. The findings are published in the August issue of Journal of Dairy Science.

Lewin and his colleagues originally sequenced the DNA of Chief and one of his sons, Walkway Chief Mark, in 2009 when Lewin was at the University of Illinois at Urbana-Champaign. “At the time, we had no idea that we’d be looking for this mutation. We were exploring a very fundamental question relating to whether we could identify so-called ‘signatures of selection’ in the genome, which can be associated with biologically important traits.” 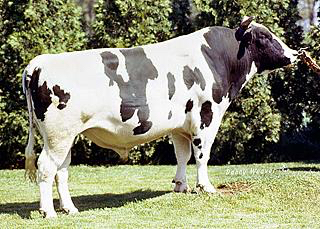 Pawnee Farm Arlinda Chief was one of the most prolific bulls in the history of Holstein cattle breeding.

In 2011, soon after Lewin arrived at UC Davis, the team was approached by scientists at the U.S. Department of Agriculture with some interesting information and a request.

Researchers at the USDA had identified a problematic haplotype (a group of genes that are inherited from one parent) on chromosome 5 of Holstein cows that was associated with lower fertility rates and embryo loss. And they had traced the haplotype back to Chief.

“They asked if we could identify possible mutations in Chief that might be responsible for the effect on fertility,” said Lewin.

Lewin and study co-author Heather Adams were able to quickly identify a candidate.

“In less than 24 hours, because we’d already sequenced Chief and his carrier son, we were able to identify a ‘nonsense’ mutation on chromosome 5. It was a Eureka moment!” said Lewin.

The mutation, which shortens an amino acid chain critical for protein-to-protein interactions, was found in a gene called APAF1, short for apoptosis peptide activating factor 1.

If a Holstein calf inherits just one copy of APAF1 from a parent, it becomes a carrier. But if it inherits copies of the mutation from both parents the combination is fatal. The team found no animals with APAF1 from both parents among the 758 animals tested. Commercial testing of more than 246,000 Holsteins showed the same results.

The study estimates the cumulative number of Holstein calf losses over a 30-year period to be more than 100,000 in the United States and about half a million worldwide.

Insight as to why the mutation is so deadly comes from mice. Previous studies show that mutations affecting the function of APAF1 cause fetal mortality in mice by affecting the development of the central nervous system. The severely shortened APAF1 peptide has the effect of making the genes inoperative because the critical piece is in the truncated portion.

“We are very confident that the APAF1 stop-gain mutation is the cause of fertility loss in Chief’s lineage,” said Lewin.

A single midterm abortion could cost a dairy about $800. Worldwide, the loss from the APAF1 mutation over the past 35 years is estimated at about $420 million.

Dairy cattle are under intense selection for traits such as milk yield and fat content. Because of this, breeders rely heavily on the use of artificial insemination, but this has increased inbreeding in the national herd, which escalates the frequency of recessive lethal genes like APAF1 in the population.

Breeders can now use diagnostic tests for the APAF1 mutation to avoid mating two carriers while still retaining the beneficial genetic contributions derived from Chief, which are estimated to be about $30 billion in increased milk production.

“The cost of sequencing has dropped to the point where it is now cheaper to sequence and interpret a whole genome than it is to genetically map a trait by traditional methods. Just as rapid, low-cost genotyping revolutionized dairy cattle breeding, so too will whole-genome sequencing be used to increase the accuracy of sire and dam selection,” said Lewin.

A recent USDA report estimates the number of milk cows in the United States at 9.32 million. Milk production in 2015 totaled 209 billion pounds, with the annual rate per cow at 22,393 pounds. Cash receipts from marketings of milk during 2015 totaled $35.7 billion.