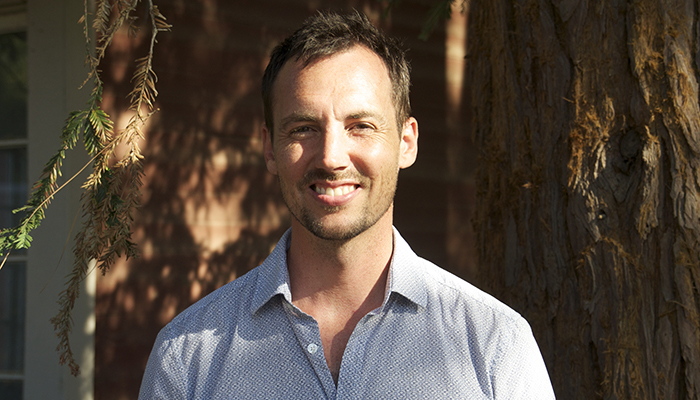 Benjamin Houlton, a professor in the UC Davis Department of Land, Air and Water Resources, has been named director of the John Muir Institute of the Environment. (Lisa Howard/UC Davis)

The UC Davis Office of Research has named Benjamin Houlton as the new director of the John Muir Institute of the Environment, known as JMIE.  Houlton takes over from Mark Schwartz, who has directed the program since 2009. Houlton, a professor in the Department of Land, Air and Water Resources, was named associate director of JMIE in January of this year.

“Dr. Houlton has assumed the crucially important job of focusing our university’s remarkable wealth of environmental expertise on the most critical environmental problems of our time, not just in California and the United States, but across continents,” Acting Chancellor Ralph J. Hexter said. “The Muir Institute has the disciplinary breadth and heft to help understand and solve complex environmental problems as the climate changes and demands for natural resources increase.”

Houlton sees a grand vision for JMIE— one that enhances environmental research and develops novel cross-disciplinary solutions to global threats.

“We are looking at another 3 billion people on the planet this century. How are we going to feed people, develop our energy economy, adapt to climate change and preserve Earth’s dwindling biodiversity? We need something on the order of NASA and the moon landing to solve this challenge,” said Houlton.

One of the opportunities Houlton envisions is the development of OneClimate, an initiative to highlight UC Davis’ role in addressing climate change and to bring together different campus centers and institutes to focus on three key areas: The science of climate change, mitigation of greenhouse gases and adaptation. “It’s a way to shine a light on what we are doing on this campus, build collaborations with partner institutions and do our part to help solve climate change,” said Houlton.

Another area where he sees the possibility for successful interdisciplinary collaboration is with the use of “big data,” compiling large data sets from diverse sources and using machine-learning techniques to develop visualization tools for resource managers, policymakers and the public. “Data-driven discovery is one of the key tools of the 21st century, and JMIE is positioned to lead the environment in this space.”

Houlton would also like to see JMIE amplify information about the environmental research and experts on campus. “At UC Davis we have perhaps the greatest concentration environmental scientists anywhere on the planet,” said Houlton. In addition to updating the JMIE website with more information and resources, the institute is also developing a platform that can quickly connect campus experts with stakeholders who need information, such as campus experts on fire when there is a wildfire.

“Professor Houlton brings a unique vision for environmental sciences and a solid track record of achievements in the area of climate change research,” said Harris Lewin, vice chancellor for research. “Now is the time to bring UC Davis to the forefront of global efforts to understand and mitigate the effects of climate change on agricultural, coastal, forest, freshwater and other essential ecosystems. We look to Professor Houlton’s leadership to integrate UC Davis’ strengths in environmental sciences in new ways to solve these major threats to the well-being of our planet.”

A focus on global ecosystems and change

The environmental impact of fossil fuels and agriculture has been a focus of Houlton’s work for years. A recent study by Houlton developed a way to more accurately forecast nitrogen’s effects on climate change and trace its movement through global land, air and water systems. This research is being adopted by the model tools used by the Intergovernmental Panel on Climate Change.

Houlton’s diverse research has appeared numerous times in Nature, PNAS, and Nature Climate Change, among others, and he has been featured in The Christian Science Monitor, Discovery News, MSNBC/Today, Nature, BBC’s “The Naked Scientists,” and NPR’s “Morning Edition.” His research spans desert to forest habits, including intensive studies of the most diverse rainforests remaining in all of Central America. His approach blends computational modeling with field observations of everything from microbial genes to global biogeochemical cycles. Houlton has been involved in several cross-disciplinary think-tanks, both domestically and internationally. He recently led an assessment of the United States’ nitrogen footprint, which was incorporated into the National Climate Assessment for the Obama administration.

Houlton has a B.S. in water chemistry from the University of Wisconsin – Stevens Point, an M.S. in environmental engineering science from Syracuse University, and a Ph.D. in ecology and evolutionary biology from Princeton University. He was a postdoctoral scholar at Stanford University and the Carnegie Institution for Science, Department of Global Ecology. Houlton joined the UC Davis Department of Land, Air and Water Resources in 2007.

Houlton’s appointment as director of JMIE is half time. He will continue to run his Earth Systems Ecology and Biochemistry Lab and will teach his high-enrollment undergraduate class, “Global Environmental Interactions” this winter.

The John Muir Institute of the Environment, one of the largest and most well-connected institutes on campus, supports and creates visibility for cross-disciplinary innovation and discovery aimed at solving global environmental problems. The institute’s faculty and staff are committed to strengthening the scientific foundation for environmental decision-making through collective entrepreneurship and a team-oriented approach that recognizes the complexities of environmental problems and the societal context in which they occur.

In 2005, JMIE became an organized research unit, enlarging the scope and range of institute activities. The institute also serves as the administrative home for 10 centers and programs that cross the boundaries of traditional academic colleges, schools and departments, including the Center for Health and the Environment, Tahoe Environmental Research Center, and Center for Watershed Sciences.