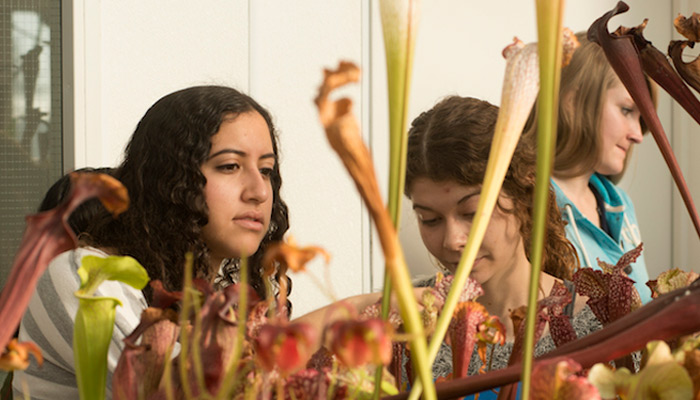 Susan Eberler’s research focuses on wine and chemistry. Patsy Eubanks Owens’ research focuses on the relationships between people and the outdoor environment. Astrid Volder specializes in plant root systems — how plant roots respond to stresses such as extreme heat or drought. And Marco Molinaro’s research has looked at the applications of technology in education for students from elementary school through college.

Using a seed grant from the Feminist Research Institute, these four UC Davis faculty and staff with diverse interests are doing research to find ways UC Davis can increase women and underrepresented minority students in environmental and other physical science majors.

Below is a Q&A with the team, which will present work from their ongoing project, “Gender Distribution in Agricultural and Environmental Sciences” at the Feminist Research Institute’s symposium, Feminist Research Across the Disciplines, May 17 at the UC Davis Conference Center.

Q: How did the team get interested in this particular topic?

A: We got interested in the research because we saw vast differences in gender ratios and underrepresented populations among different majors in our college. While overall enrollment of women in higher education has increased over the past decades, we have seen some majors in our college which used to be predominantly male switch to now being predominantly female, for example, animal sciences, while majors that have been historically female dominated, such as human development, have remained so.

Many previous studies have focused on quantitative data such as high school test scores to understand student choices of majors and entry into STEM fields. Few studies have focused on gender distributions in colleges of agriculture. And, in addition to quantitative data, we wanted to obtain qualitative, first person accounts (using focus groups) to better understand factors affecting choice of major by under-represented males and females in a range of majors in the College of Agricultural and Environmental Sciences.

Q: How are you trying to understand factors that affect a student’s choice of major?

Q: Why is this project important?

A: By understanding factors that influence major choice, we hope to identify approaches to increase participation of women and underrepresented minority students in environmental and other physical science majors.

Read More
← Researchers launch underwater robots to study how and when ice shelves collapse Researcher Spotlight: How an Interdisciplinary Team of Researchers Became Interested in the Ethics of CRISPR/Cas-9 →