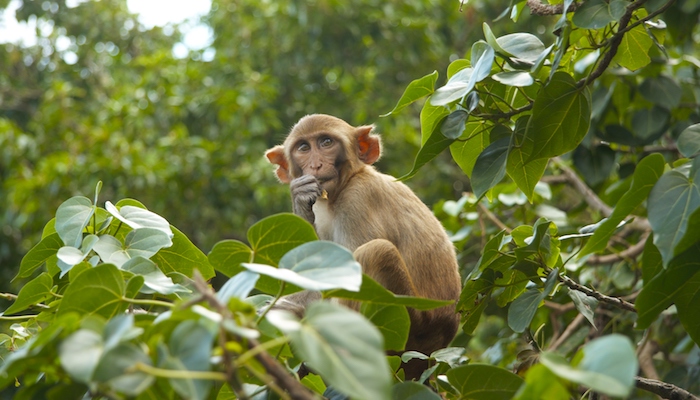 Cayo Santiago, the oldest free-ranging research colony in the world for primates, took a direct hit from Hurricane Maria. The island’s infrastructure was obliterated. (Photo courtesy of Lauren Brent, University of Exeter)

When Darcy Hannibal wanted to eat lunch while she was studying rhesus macaques on Cayo Santiago — also known as Monkey Island, a half mile off the coast of Puerto Rico — she had to put herself in a cage. “Otherwise the monkeys will go for your food,” said Hannibal. “They aren’t interested in your water, though.”

The small 38-acre island is home to about 1,000 rhesus macaques and is run and maintained by the Caribbean Primate Research Center (CPRC) and the University of Puerto Rico. Hannibal spent a year and a half in 2004-05 observing the macaques on Cayo Santiago for her her doctoral dissertation. She studied whether an animal’s rank in the troop affected how it used cheek pouches (it did; low-ranking animals tended to use them more and fill them more often).

Hannibal is now a project scientist in the Department of Population Health and Reproduction at the UC Davis School of Veterinary Medicine and conducts research at the California National Primate Research Center (CNPRC). When she heard that Cayo Santiago and the mainland field station in the town of Punta Santiago had taken a direct hit from Hurricane Maria, Hannibal was immediately concerned both for the center’s staff and the macaques.

The good news was that the staff of the Cayo Santiago Biological Field Station all survived the hurricane, but the town of Punto Santiago, where many of them live, was devastated and left without water, electricity or communication.

All the monkeys also appear to have survived. The island’s infrastructure, however—piers, buildings, rainwater collection system to provide monkeys with fresh water, feeding corrals for monkey chow, cages used to take an annual census, and even the researcher lunch cages—were completely obliterated. Shipments of the necessary monkey chow were also interrupted. It was clear that the situation for the staff and the animals was dire.

Professor John H. Morrison, director of CNPRC at UC Davis, describes the response from the primate research community. “In one of our weekly conference calls, the directors of the National Primate Research Centers decided very quickly that we needed to help the Caribbean Primate Research Center and Cayo Santiago rebuild,” he said. “We view CPRC as one of our sister centers, and fortunately, we were able to mobilize our response and deliver material in a very timely fashion. We are in constant communication with CPRC and stand ready to help in any way we can going forward.”

All of the seven National Primate Research Centers in the United States, including CNPRC at UC Davis, contributed $5,000 each to help rebuild the damaged facilities in Puerto Rico.

Hannibal and other colleagues worked with scientists from other universities to fill a shipping container with desperately needed supplies for both the field station’s staff and the research facility, including water, canned food, diapers, baby formula, tarps, water purification tablets and filters, chain saws and other equipment.

The primate researchers also prepared an emergency National Science Foundation (NSF) grant application for Cayo Santiago. Hannibal and Ronnie Walgenbach at the CNPRC used photos of some of the destroyed equipment to calculate replacement costs needed for the NSF grant.

Now, more than a month after the hurricane, the situation in Puerto Rico remains dire. Roughly eight out of 10 residents are still without electricity and one million residents, including the residents of Punta Santiago, do not have water, leading to many health problems. Lack of access to hot meals, sanitation and medical care remain on-going problems, as well as housing, with many roofs having been damaged or completely blown off by the hurricane.

“When I lived there for a year and a half, I got to know people in the town,” Hannibal said. “People at the center helped me a lot and I want to give back to them. The hard part is just how cut off they are from the outside world. It’s improving but it’s still bad. People there are getting more desperate, and you can hear the desperation in their posts and voices. You feel like you are trying and it’s not enough.”

Hannibal and her colleagues at UC Davis hope they can get the word out about the importance of this unique research facility and get help for the Cayo Santiago staff and monkeys. She encourages anyone who wants to help in any way, or would like more information, to contact her directly at dlhannibal@ucdavis.edu.

In addition to supplies, Hannibal and other supporters are trying to raise cash for the facility. Two GoFundMe pages have been created, one for the staff, Relief for Cayo Santiago Employees, and one for the animals, Cayo Santiago Monkeys: Maria Relief. There is also a Facebook page, Friends of Cayo Santiago, where people can get updates about the damage and recovery efforts.

“Cayo Santiago has a special place in the heart of primatologists” said John Capitanio, professor of psychology and leader of the Neuroscience and Behavior Unit at CNPRC. He noted that the American Society of Primatologists held their annual meeting in Puerto Rico in 2013 to help celebrate the island monkey colony’s 75th anniversary.

“That meeting allowed many primatologists, especially students, to see close up the facility that they had only read about,” said Capitanio. “The outpouring of support by all seven NPRCs as well as by hundreds of primatologists, primate center staff, and other supporters from around the world is a reflection of the importance of Cayo as a significant scientific resource.”

Cayo Santiago is the oldest free-ranging research colony in the world for primates. All of the macaques that live on the island are direct descendants of the 409 monkeys brought to the island in 1938, making it an invaluable resource for scientists who study primates.

Researchers from universities in the United States and Europe use the island for a wide variety of primate behavior studies.

“There’s no other population that has so much long-term history,” said Hannibal. “Every individual on that island is identified and has been for many, many generations. It’s a remarkable resource for studying primates.”

Punta Santiago was the hardest hit location in the Humacao municipality, where Maria made landfall. The above FEMA video shows a FEMA official visiting Cayo Santiago and Punta Santiago to document some of the damage and recovery efforts. Cayo Santiago coverage starts around 1:30. “Hurricane Maria was completely devastating to Cayo Santiago.”