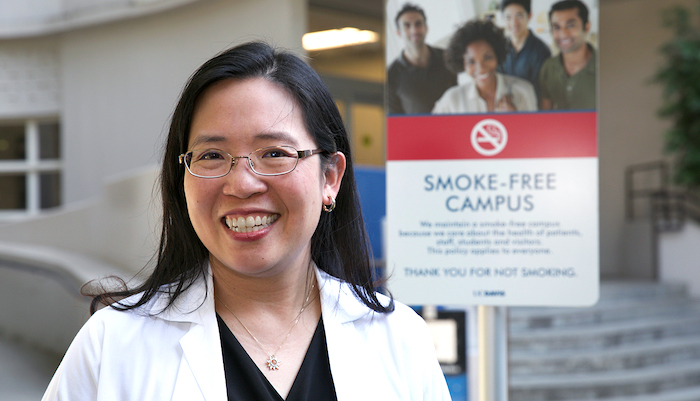 Elisa Tong, a general medicine physician at UC Davis Health is leading a new $6 million statewide effort to help patients who use tobacco products get the resources they need to quit. (Lisa Howard/UC Davis)

“Second-hand smoke is what comes off the cigarette but third-hand is what might off-gas from, say, a carpet. Just imagine what you smell walking into a smoky casino. Research has shown that third-hand smoke is actually even more toxic per gram. And the smell of it can be a trigger to smoke for smokers and ex-smokers.”

Tong is leading a new, five-year, $6 million statewide project, CA Quits, to more seamlessly connect patients who use tobacco products with resources — counseling with the free state quitline, medications like nicotine patches — that can help them quit. It’s about removing barriers and making sure quitting is part of a patient’s overall health plan.

“Patients can get discouraged. They’ll say, ‘I already tried to quit,’” said Tong. “But it’s important for patients and providers both to know that itusually takes multiple tries to quit. Research shows it can take more than a dozen tries.”

CA Quits builds on the success of UC Quits, which Tong also leads and which integrated tobacco assessment and treatment into the electronic medical record and workflows at all five University of California Health systems. The five UCs have connected electronically with the free state quitline and have over 10,000 referrals to date.

Tong grew up in the Greenhaven-Pocket neighborhood of Sacramento and she can remember when people could light up and smoke cigarettes on airplanes, a practice that was gradually phased out on domestic flights beginning in 1988. She also remembers people smoking in restaurants.

“Back in the day, that was acceptable. At best you asked for the no-smoking area,” said Tong, despite the fact that the smoke would waft throughout the entire restaurant.

She is still somewhat mortified that, as a college freshman visiting China as part of a family history program, the group brought Western brands of cigarettes to give to the hosts as gifts. “Someone had said, ‘Oh, you should give them cigarettes. That’s what they want because they can’t buy Western cigarettes yet,’” said Tong. “I thought, ‘That’s weird, why are we giving them cigarettes?’”

Tong was a human biology major at Stanford, interested in neuropsychology and behavior in addition to learning more about Asia. After receiving her bachelor’s degree, she stayed on at Stanford for medical school. For a medical student conference on health care, she happened to help organize a seminar that featured Stanton Glantz, a professor in the UCSF Department of Medicine who studied the health effects of smoking.

In 1994, Glantz had received a mysterious box that had a return address with the name “Mr. Butts,” a reference to the pro-smoking Doonesbury cartoon character. Inside were 4,000 pages of confidential documents from Brown & Williamson Tobacco Corporation. At the time, Brown and Williamson was the nation’s third-largest tobacco company in the U.S. and the maker of cigarette brands like Kool, Pall Mall and Lucky Strike.

Brown & Williamson unsuccessfully sued the University of California to recover the documents, and the UCSF library went on to make all the documents available on CD-ROM and on the internet.

The contents of the box would turn out to be a gold mine for tobacco researchers and a major turning point in litigation against the tobacco companies for the health harms of tobacco. Some of the papers were more than 30 years old and showed that the tobacco industry hid knowledge that nicotine was addictive and that smoking likely caused cancer and other fatal diseases.

A partial summary of the papers was published in the Journal of the American Medical Association in 1995, and, in 1996, the University of California Press published The Cigarette Papers, a complete analysis of all the memos.

Tong credits learning about tobacco control policy in the seminar with Glantz as changing her life. “I learned about how the tobacco companies operate and were all moving to the developing world, especially China, because that’s where the market could grow. In China, more than half of the men smoke, but they knew women didn’t and they were going to get women to smoke,” said Tong. “I had been studying for a master’s in health services research in addition to medical school and thought, ‘I’ve got to do something about this.’”

Tong stopped her medical school studies for couple of years so she could conduct research with Glantz at UCSF. Millions more previously secret tobacco industry documents were publicly released through a settlement between tobacco companies and the state of Minnesota to recover smoking-related Medicaid costs. These documents and more are available online through the UCSF library.

“I just happened to come at a great time to start analyzing these tobacco industry documents,” said Tong. “I would go through memos — I was like a lawyer. And I kept finding references to this one acronym in the documents that I didn’t know what it was — IARC.”

IARC, she would learn, stands for the International Agency for Research on Cancer, part of the World Health Organization of the United Nations, tasked with research into the causes of cancer. And the references to it in the papers turned out to have major implications.

“What I found was evidence that the tobacco companies had come up with a comprehensive multi-million dollar plan — with scientific, public relations and regulatory strategies— to subvert one IARC research study before it was published because of its potential to stimulate smokefree policies worldwide,” said Tong.

At that time, IARC was doing a multi-national trial about second-hand smoke and the risk for lung cancer among nonsmokers. Tong ended up flying to Europe to present her research to IARC and the World Health Organization, an audience that included its Director General. The U.S. Environmental Protection Agency had already concluded years earlier that the scientific evidence showed second-hand smoke caused cancer, and Tong’s presentation let them know the tobacco industry was working to subvert those findings for the rest of the world. Later, IARC would issue a monograph concluding that second-hand smoke caused cancer.

Her very first study ended up being published in the prestigious medical journal, The Lancet, and she won a national research award.But as heady as all this was for a young researcher, she knew she needed to complete her medical training. “I had such a great experience with the tobacco industry documents but I really needed to figure out how that would work with being a doctor, too.”

After completing medical school and her residency training in internal medicine, she went back to UCSF for a general medicine research fellowship.

Tong has been a faculty member at UC Davis Health since 2006, where she’s continued her research work on tobacco control policy and cessation, as well as taking care of patients as a general internist. In addition to the CA Quits and UC Quits projects — and perhaps somewhat full circle from her experience giving out cigarettes in China — she also has led research studies to develop evidence-based tools for tobacco and cancer control for Asian communities in the U.S. and abroad.

The percentage of Americans who smoke has declined over the past few decades, but there’s still a long way to go.

“People across the U.S. assume Californians don’t have a tobacco problem because there’s been such a strong smoke-free policy program for so many years,” said Tong. “But California is a big state. We still have over 3 million smokers. That’s a lot. And it’s a diverse population too. So how do you help everyone?”

And while cigarette smoking has declined overall, the tobacco industry has created an entirely new set of challenges for tobacco cessation researchers and healthcare professionals with the growing popularity of e-cigarettes and vaping.

“E-cigarettes have gone viral with youth and young adults,” said Tong. “Kids in high school are using these new products because they have fruit, candy and mint flavorings.”

An alarming survey from Monitoring the Future  showed a record number of teens vaping — about 1 in five — and additional analysis of the data published in the New England Journal of Medicine showed that the number of high school students using e-cigarettes grew by a whopping 1.3 million in 2018. In December 2018, the U.S. Surgeon General warned that youth vaping is now an epidemic.

But many of the kids don’t even know that the devices — some of which look innocuous, like a flash drive — have nicotine in them and are considered tobacco products.

“Just one pod — what they use in the device — is equivalent to one pack of cigarettes,” said Tong. “There’s a tobacco flavor but there’s also mango, mint and crème brûlée. You could pick the mango flavor and think there’s no nicotine.”

Tong sees a playbook similar to the strategies she found in the tobacco industry documents.

“Electronic cigarettes and other new tobacco products are not yet regulated by the Food and Drug Administration, nor are they approved for tobacco cessation in the U.S. And the largest tobacco company just bought a 35 percent share of the most popular flash-drive tobacco product. There’s a new generation of tobacco users,” said Tong. Healthcare providers will need to learn about these new developments, in addition to working towards helping their patients quit.

“While it may take years to fully understand the long-term health risks, there is a growing body of evidence that any time you inhale particles or chemicals, there are immediate inflammatory reactions that affect your heart and lungs, plus a lot of these products have carcinogens,” said Tong. “Which is why I tell my patients, ‘Your body isn’t meant to inhale anything other than air.’”