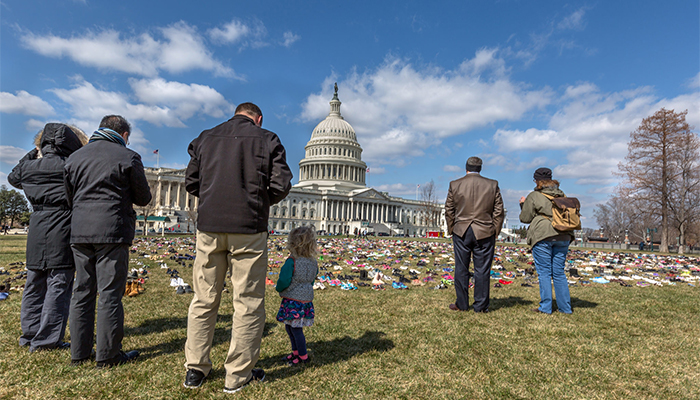 Protestors left 7,000 pairs of shoes in front of the Capitol building to symbolize the estimated number of children killed by gun violence in the United States since the Sandy Hook Elementary School shooting in 2012. In the aftermath of the recent mass shooting in Florida, 22 states are considering Gun Violence Restraining Orders laws. Two UC Davis physicians who helped get California’s GVRO law on the books, Dr. Garen Wintemute and Dr. Amy Barnhorst, explain why the legal tool is needed and how it might offer real hope for decreasing gun violence. (Lorie Shaull/Flickr Creative Commons) 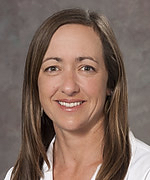 Dr. Amy Barnhorst, a psychiatrist and the vice chair of Community Psychiatry in the UC Davis Department of Psychiatry and Behavioral Sciences, became involved in gun violence prevention after the 2012 mass shooting at Sandy Hook Elementary School in Connecticut that left 20 children and six adults dead.

In the aftermath of the killings, speculation about whether the shooter, Adam Lanza, had some sort of mental illness, in addition to his diagnoses of Asperger’s syndrome and sensory processing disorder, became a focus in trying to understand the tragedy.

At the time, Barnhorst had children in elementary school and was devastated by the killings. “I felt powerless,” she said. But she was also frustrated by the narrative that emerged.

“Basically, there is no strong association between violence and mental illness,” Barnhorst said.

She points out that studies show people with substance abuse, alcohol use and a past history of violence are at much higher risk for violent acts than people with mental illness.

A 2016 study by Jeffrey Swanson at Duke University, with whom Barnhorst has worked, shows exactly that: an estimated 96 percent of the violence would continue to occur even if the risk of violence in people with mental illness was reduced. The same study found that the group with a substantially increased risk of violent behavior is “younger individuals, males, those of lower socioeconomic status, and those having problems involving alcohol or illicit drug use.” 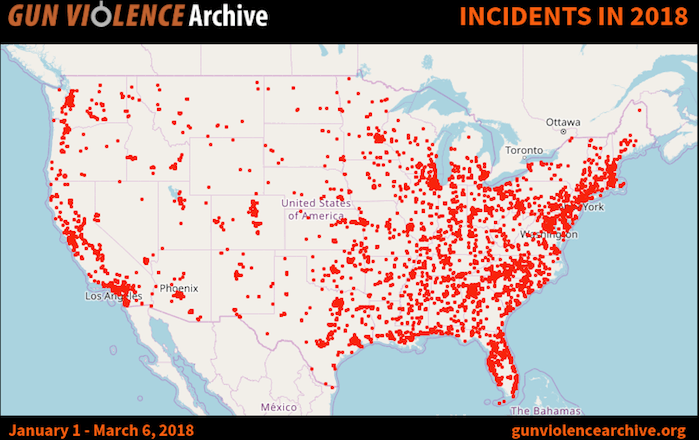 There have been 9,628 incidents of gun violence in the United States between January 1 – March 6, 2018 according to Gun Violence Archive (GVA). There have been 39 mass shootings since the beginning of the year, 4,326 injuries and 2,539 deaths. (Credit: GVA)

One resource mental health professionals like Barnhorst rely on is the Federal Gun Control Act of 1968. The act prohibits anyone who has been “adjudicated as a mental defective” or “committed to any mental institution” from owning a firearm.

“It’s a very select group of people who meet that criteria in the system,” Barnhorst said. “They have to have been before a court or hearing.”

Many of the patients Barnhorst sees in the crisis unit are under an involuntary psychiatric hold, known as a 5150, named after the section number of the California Welfare and Institutions Code. Law enforcement officers and specifically designated clinicians can request a hold of up to 72 hours in confinement if the person presents a danger to himself or herself or others. Those who are admitted cannot possess or own guns for five years, although they may petition a court to regain their firearm rights.

But one large gap Barnhorst and others saw was when there was a concern about potential violence but not a justification for a 5150 hold. “Most mass shooters didn’t have signs of mental illness. A lot of them are just angry, disenfranchised young men,” she said.

As an example, she points to Elliot Rodger. “People were concerned about him, they sent the police out to his apartment, but the police had no cause to search the place. So, they left.” On May 23, 2014, Rodger, a UC Santa Barbara student, went on a rampage, killing six people and injuring 14 others in Isla Vista, California, before killing himself.

Just days after the Isla Vista attack, California Assembly Members Das Williams and Nancy Skinner, with support from family members of some of the students who had been killed, introduced legislation that would permit law enforcement officials and family members to seek a restraining order from a judge that would prohibit people with a potential for violence from buying or owning a firearm. The process would be similar to the one already in use for domestic violence restraining orders and would bar the possession of firearms for up to a year.

Barnhorst testified on behalf of the bill. “My testimony focused on how the mental health system couldn’t reach out and grab someone,” Barnhorst said. “The gun violence restraining order fills a gap, where a person hasn’t done anything yet, and they aren’t mentally ill, but people are worried. It’s a quick-acting mechanism,” she said.

Unlike the 5150 hold, family members, in addition to law enforcement, can petition. The law is also meant to protect people from self-harm.

“Even though we worry about mass shootings, there is double the amount of firearm suicides every year compared to homicides,” Barnhorst said. 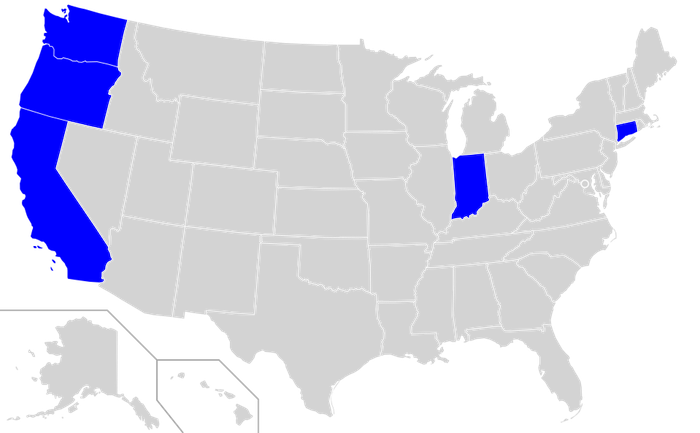 California is one of only five states with a gun violence restraining order law, also sometimes called an extreme risk protection order law, which allows the police to temporarily take away guns from a person deemed by a judge to be dangerous. The other states are Connecticut, Indiana, Oregon and Washington. (Map credit: Wikipedia Creative Commons) 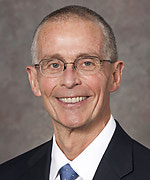 Wintemute is a renowned expert on firearm violence prevention and has spent 35 years studying the issue as a public health and public safety problem. He is the longtime director of the Violence Prevention Research Program at UC Davis Health as well as director of the newly established University of California Firearm Violence Research Center, the country’s first publicly funded center devoted to the study of gun violence.

He was also a key contributor to getting gun violence restraining orders in California.

“Risk-based approaches make lots of sense,” Wintemute said. “Both our research and my clinical experience told me that there were identifiable, high-risk individuals who were not prohibited persons and for whom a targeted intervention could have sizeable benefits.”

Wintemute was actually working on what would become AB 1014 before the Isla Vista shooting. “I helped draft the bill, and the language was well along when Elliott Rodger proved the point. The bill was introduced in response to that event,” Wintemute said.

With the latest mass shooting at Marjory Stoneman Douglas High School In Parkland, Florida, in which Nikolas Cruz allegedly killed 17 people using a semi-automatic AR-15 rifle, gun violence restraining orders like California’s AB 1014, which are also known as “red flag laws,” or “extreme risk protection orders,” are being discussed as a possible gun violence solution at the state level.

Wintemute strongly discourages the term “red flag laws.” He describes the term as alarmist and tantamount to fearmongering. In his view, and that of others in the field, it detracts from one of the strengths of gun violence restraining orders: their clear focus on behavior.

Only five states — California, Connecticut, Indiana, Oregon and Washington — have these laws.

California’s went into effect Jan. 1, 2016, and during the first year, courts in the state granted 86 gun violence restraining orders.

The city of San Diego released a list describing the restraining orders issued since the law went into effect. The reasons for the orders ranged from domestic violence to drunkenness to mental illness.

In one case, a man told his fiancé by text that he wanted to shoot her in the head. In another, a man intoxicated at three times the legal limit terrified his neighbors when he began shooting bullets through his back fence believing he was shooting at raccoons and rats in his backyard. Another involved a 23-year-old ex-Marine who had developed a paranoia that all males wanted to harm him.

In all the cases, the firearm owners were ordered by a judge to surrender or sell all firearms in their possession and to not acquire or possess firearms or ammunition for 12 months.

Wintemute points out that alcohol may frequently play a role in gun violence restraining order cases. “The available evidence suggests that alcohol is strongly associated with an increase in risk for firearm violence, including among people who have legally purchased firearms.” 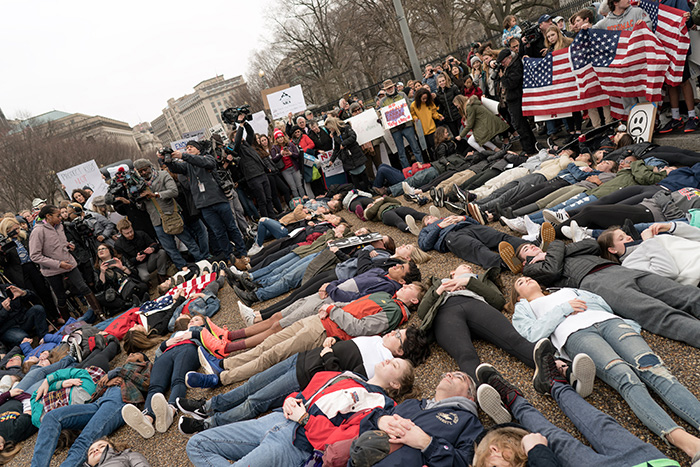 Students staged a lie-in at the White House February 19, 2018 to protest gun laws in the wake of the shooting at Marjory Stoneman Douglas High School in Parkland, Florida. (Lorie Shaull/Flickr Creative Commons)

A new group of advocates for gun reform

When Barnhorst heard about the Florida shooting, she knew the narrative would be familiar and still inaccurate. “I thought, the guy fits that profile once again, where people will assume he’s mentally ill, but he’s just an angry, vengeful guy who didn’t get disqualified from owning a firearm. He slipped through the holes because there wasn’t something in place for people like him,” Barnhorst said.

This time she channeled her frustration about widespread misrepresentations of mental illness and violence into an op-ed for The New York Times, “The Mental Health System Can’t Stop Mass Shooters.” The piece stayed in the top five most emailed for days and received over 500 comments. Barnhorst also appeared on The New York Times podcast, The Daily, debunking the notion that the mental health system alone can or should fix the problem.

She feels with the latest mass shooting that there has been a shift in momentum.

“It’s been more than three weeks and people are still talking about it,” Barnhorst said. “It gives me hope when we have a fresh group of people advocating, especially the students. They are a very compelling group. It is also heartening that so many states are taking gun violence into their own hands, taking gun violence restraining orders into consideration.”

Barnhorst thinks that gun violence restraining orders are just one piece of a very complex problem. “But I think it’s a good way to fill in at least one of the gaps.”

Twenty-two states, including Florida, are now considering some version of a gun violence restraining order.

In regard to whether a gun violence restraining order could have helped prevent the shooting at Marjory Stoneman Douglas High School in Florida, Wintemute is unequivocal.

“Without doubt. We’re evaluating California’s gun violence restraining order policy, and I know for a fact that the orders have been used to prevent such events here,” Wintemute said. 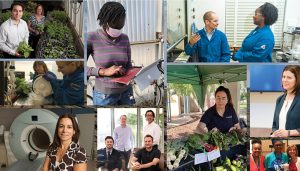 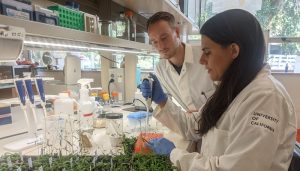 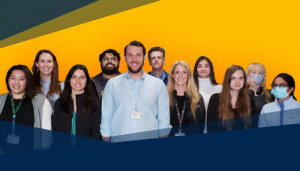