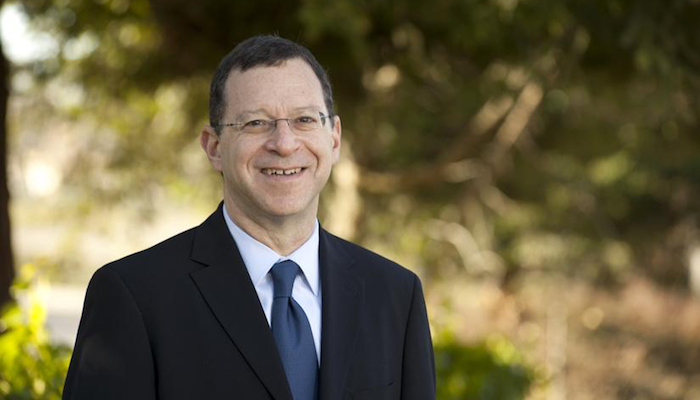 Harris Lewin has decided to return to the faculty in the Department of Evolution and Ecology and the Genome Center after successful service as vice chancellor in the Office of Research over the period of his five-year term.

Harris Lewin has decided to return to the faculty in the Department of Evolution and Ecology and the Genome Center after successful service as vice chancellor in the Office of Research over the period of his five-year term. Lewin, who joined UC Davis in 2011, will transition out of the office in the fall and take a sabbatical effective Oct. 1 before resuming his faculty obligations of teaching, research and outreach.

Under Lewin’s leadership, UC Davis hit an all-time high for external research funding, receiving $786 million in 2015, an 11.5 percent increase from the previous year, and reflecting a surge in support from the federal government, 13.4 percent year over year. Corporate partnerships increased by 51 percent, and UC Davis is now the leading UC campus in licensing revenues per $10 million in research expenditures.

“I am truly grateful for Harris’ leadership in our Office of Research, which has seen an amazing growth during his tenure,” Chancellor Linda P.B. Katehi said. “Harris has demonstrated a unique ability to reform the operations of the Office of Research and reinvigorate faculty and staff to take bolder steps to partner with government and industry and advance the university’s research capabilities and impact.”

Grand Challenges initiative
In 2012, the Office of Research launched a Grand Challenges initiative for funding interdisciplinary research that led to more than $100 million in new external research funding. The Research Investments in Sciences and Engineering, or RISE, and the Interdisciplinary Frontiers in the Humanities and Arts, or IFHA, programs are examples where the university made a bold investment to assemble teams from multiple disciplines with the intent of developing transformative knowledge and technologies that address areas of vital concern such as food supply, health and economic distress.

Lewin has taken steps to expand revenue sources, establish a model of diversity and tolerance, advance excellence in research, streamline operations and create a healthier world through bold innovation. Under his leadership, the Office of Research has also taken major steps to enhance UC Davis’ role in the regional economy by creating leading-edge programs that promote technology transfer and corporate engagement. Last year alone, the Office of Research processed 229 new-invention disclosures, 210 patent applications and 57 licenses that resulted from research at UC Davis. In addition, new technologies developed at UC Davis became the foundation for 13 startup companies. The new Venture Catalyst unit supports these start-ups by providing critical services and incubator space, and works closely with other programs on campus to encourage entrepreneurship among UC Davis faculty, staff and students.

“I have been extremely fortunate to have had the opportunity to lead the research enterprise at my alma mater, and to serve the university that gave me a solid foundation for my future as a scientist and educator,” Lewin said. “Enabled by Chancellor Katehi’s strong support for the research mission, the Office of Research has made huge advances and is now a high performing organization by all metrics. I want to thank my senior staff and all Office of Research employees for their dedication to our mission and friendship during the past five years, my colleagues in administration for their partnership and commitment to excellence, and the faculty for their extraordinary efforts to make UC Davis one of the world’s great research universities. I am looking forward to rejoining the faculty and immersing again in the research, teaching and outreach missions of the university.”

“I have been extremely fortunate to have had the opportunity to lead the research enterprise at my alma mater, and to serve the university that gave me a solid foundation for my future as a scientist and educator.” — Harris Lewin

Lewin earned his Ph.D. at UC Davis in 1984. He then spent 27 years on the faculty in the Department of Animal Sciences at the University of Illinois. In 2003, he was named the founding director of the Institute for Genomic Biology, which was housed in a $75 million complex he helped design and build. Lewin is widely known for his discoveries in immunogenetics and comparative and functional genomics. He is an elected foreign member of the Royal Swedish Academy of Agriculture and Forestry, and won the 2011 Wolf Prize in Agriculture for his research in cattle genomics. In 2012, he was elected to the National Academy of Sciences.

In the coming weeks, Chancellor Katehi will announce plans for recruiting the university’s next research vice chancellor.

Dana Topousis Dana Topousis is the interim director of the Office of Strategic Communications. You can reach her at 530-752-9841 or dtopousis@ucdavis.edu.