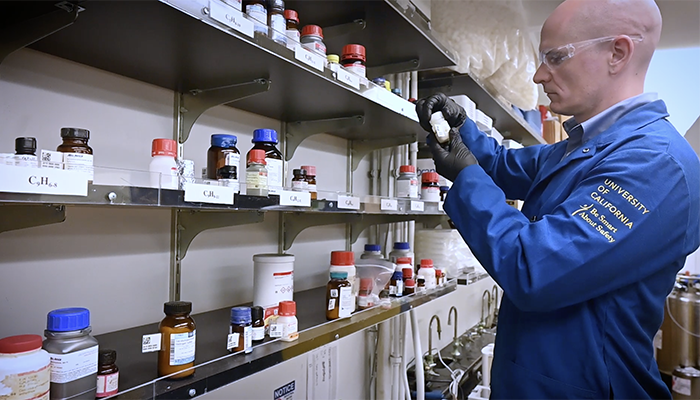 UC Davis-enabled neuroscience startup Delix Therapeutics recently closed a $70 million Series A funding round. Co-founded by David E. Olson, associate professor in the Department of Chemistry and the Department of Biochemistry & Molecular Medicine, the preclinical startup is focused on developing safe, non-hallucinogenic, take-home medications for patients suffering from neuropsychiatric illnesses. The company announced its plans to bring two compounds through phase 1 trials by 2023 to treat brain disorders and augment its drug discovery work.

The 2021 World Health Report states that one in four people in the world may suffer from some form of brain disorder at some point in their lives. Atrophy of neurons in key parts of the brain are visible clues of brain disorders in patients. In 2018, researchers in the Olson Lab discovered that psychedelic drugs like LSD, MDMA and ibogaine are particularly effective psychoplastogens that can regrow damaged cortical neurons, possibly explaining why they produce sustained therapeutic effects after a single dose. Importantly, they also discovered that the hallucinogenic effects of these compounds can be decoupled from their beneficial effects on neuronal growth, enabling the creation of more scalable treatment options.

As dysfunctional neural circuits strip the brain of cognitive abilities and tamper with emotions like fear, motivation and reward, Delix builds on the foundation of Olson’s research focused on harnessing neuroplasticity – the brain’s way of forming new neural connections to heal damaged neural circuits. By combining cutting-edge research and psychedelic-inspired science, the company is targeting a broad range of diseases including treatment-resistant depression, addiction, PTSD, cognitive impairment in schizophrenia, neurodegeneration and many others.

While psychedelic drugs have been shown to hold great promise for treating a variety of brain disorders by regrowing cortical neurons, they can have serious side effects including hallucinations, cardiac toxicity and abuse liability. To address these drawbacks and eliminate hallucinogenic liability, Olson’s team invented several safer, non-hallucinogenic variants including analogs of psilocybin, ibogaine and MDMA.

Delix Therapeutics was born out of Olson’s interest in using a molecule called ketamine (recently approved by the FDA for treatment-resistant depression) to heal broken neural circuits. Research on ketamine suggests that its therapeutic effects stem from its ability to promote the growth of cortical neurons. Olson’s academic lab was inspired by previous research on ketamine, which ultimately led to their discovery that psychedelic drugs like LSD and dimethyltryptamine DMT) were able to grow cortical neurons to a comparable extent as ketamine.

For Olson and his team, the next step was to find a way to decouple hallucinogenic properties of psychedelic substances from therapeutic properties. By manipulating the molecular structure of psychedelic molecules, his lab was able to discover several novel compounds that eventually led to the formation of Delix Therapeutics. Delix has expanded on the work of the Olson Lab and created ~1,000 new compounds.

The company envisions a healing-based approach to neuropsychiatric disease treatments. Olson and his team hope to commercialize drugs that will change the course of illnesses like depression, addiction and dementia rather than simply mitigating disease symptoms.

In 2017 and 2018, Olson received support to advance the technology towards commercialization from the UC Davis Venture Catalyst Science Translation and Innovative Research (STAIRTM) grant program.

“Funding from the STAIR program proved absolutely critical to the success of our research on non-hallucinogenic psychoplastogens,” said Olson.  “Not only did it enable us to lay a solid scientific foundation for what would become Delix Therapeutics, it also served as a catalyst for additional funding opportunities that have taken our academic research in exciting new directions.”

Olson’s research in this area has been published in several scientific journals including Nature, Cell and the Journal of Medicinal Chemistry. In 2021, Olson was recognized with the Chancellor’s Innovation Awards for his impactful research accomplishments.

In addition to the Series A raise, Delix was recently listed as one of Fierce Biotech’s Fierce 15. Previous companies on their list include Moderna Therapeutics and other industry leaders with substantial contributions to the field of medicine.