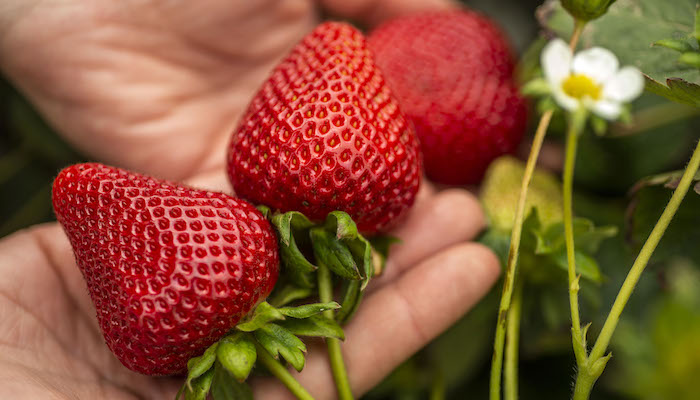 The University of California has entered into a master licensing agreement with Fresa Fortaleza, LLC (F2), based in Watsonville, CA, for the sublicensing of new strawberry cultivars in Mexico. The agreement governs the licensing of five new cultivars, and anticipated future cultivars, from the UC Davis Public Strawberry Breeding Program.

In the United States and Canada, strawberry cultivars from the UC Davis Public Strawberry Breeding Program are licensed on a nonexclusive basis directly to nurseries. Outside of the U.S. and Canada, the University of California relies on business partners, referred to as “master licensees,” as intermediaries.

Consistent with the UC Davis strawberry master licensing model, F2 will work with UC Davis researchers, plant nurseries and fruit producers to test the commercial potential of the new strawberry varieties in Mexico. As the master licensee, F2 will implement and manage the licensing of the varieties to propagation nurseries and fruit growers, if the parties agree to move forward with a variety in Mexico.

This new arrangement will not impact the university’s current licensing program for the California strawberry industry. Additionally, F2 is obligated to operate the licensing program on a royalty-based, open-access licensing model, which will ensure the new UC Davis strawberry varieties are broadly available to growers in Mexico.

“The agreement between F2 and UC Davis is another important step in the process of strengthening and expanding business partnerships to support the testing, propagation and commercialization of strawberry cultivars developed by UC Davis,” said Steve Knapp, professor and director of the UC Davis Strawberry Breeding Program. “The F2 team brings significant leadership, experience and expertise to this partnership. We look forward to working with them.”

UC Davis evaluated proposals from multiple companies. F2, which brings together established strawberry growers and nurseries, was selected for its extensive experience with the Mexican strawberry industry. Ernie Farley, Dave Murray and the other industry veterans who founded the company have decades of experience in strawberry production and cultivar evaluation. F2 maintains access to strawberry production research facilities in Mexico to showcase UC Davis varieties and complement grower field trials.

“Fresa Fortaleza was founded on the simple idea of using our collective experience in Mexico to create multi-stakeholder value,” said Murray. “Our data-driven approach will help establish a pipeline for new and improved UC Davis cultivars in Mexico, allowing growers to provide a world-class strawberry experience to consumers in North America and abroad.”

The terms of any individual licenses undertaken under the agreement will be defined once the commercial potential of individual varieties has been determined. The term of the agreement is ten years.

“I am excited that we have reached an agreement with F2 to represent our new strawberry varieties in Mexico,” said Bill Tucker, interim associate vice chancellor for Innovation and Technology Commercialization at UC Davis. “F2’s principals have a deep knowledge of strawberry production and marketing in California and Mexico, so our new licensing relationship will also allow our breeding program to benefit from their feedback. We look forward to F2’s support of the commercial development of these varieties across the entire spectrum of Mexican strawberry producers.”

The University of California has been breeding strawberries since the 1930s, and the breeding program has been located at UC Davis since the early 1950s. The goal is to develop new, commercially useful varieties of strawberry plants that have higher quality berries, are less vulnerable to pests and diseases and can be grown more efficiently. During the prior six decades, the program developed more than thirty patented varieties. Approximately one billion patented strawberry plants are planted worldwide each year. Strawberries are a top-earning invention for the university; in fiscal year 2019, UC collected over $7 million in gross licensing revenue. A portion of the revenues received by UC from licensing its strawberry varieties fund the UC Davis Public Strawberry Breeding Program to support the research and innovation on which the industry relies.